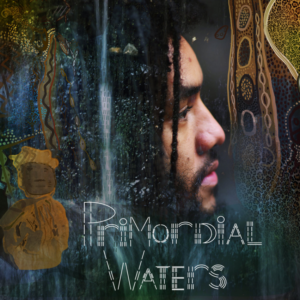 Anything but indulgent, the much acclaimed American jazz and hip-hop prodigy, Jamael Dean, dreams big with a most ambitious new twenty-track album of tribune and social-political clout. Nothing less than raising the spirits of Black-America, Dean weaves together both a respectful acknowledgement of his Yoruba roots and a street view celestial hip-hop/jazz symphony tribute to L.A.’s Leimart Park – a predominantly Black neighbourhood that’s said to be on the ‘frontline of gentrification’, known for its Black business owned community hubs like Eso Won Books, the Sika Art Gallery, Ride On bike shop and World Stage.

Not so clear cut, nor divided, the Primordial Waters flow between jazz, soul, hip-hop and the classical; the vocals, a mix of diaphanous contoured, lush, lulled and more worked female voices and Dean’s own Freestyle Fellowship mixed with Tanya Morgan and Odd Future poetic, aggrieved observational and conscious raps.

Referencing various deities, spirits from the Yoruba peoples ‘primordial’ creation myth, much of the material splashes around in tumultuous waters as Dean’s collaborative foils, Sharada Shashidas and Mekala Session, use their voices like melodious instruments. At their most intense those vocals, which flow between ancestral dialects, lyrics and sounds, evoke a wailing Linda Sharrock, and just beautifully transcendent when untethered and free. All the while that electric piano spots, dashes and lays down baubles of brightened notes, whilst the drums splash around and offer shimmers and waves of choppy, galloping swells. Beyond-this-realm atmospherics build up a dreamy yet earthy soundtrack of Yoruba mythology.

The Yoruba’s roots began in what are now Nigeria, Benin and Togo, spreading out to all corners of the continent and overseas as a result of both conquest and enslavement. Their deities, traditions are both paid homage to throughout this mini opus. As a musical legacy this civilisation, which spawned the Oyo Kingdom and Benin Empire, is immensely rich and influential. And so across this story of creation there’s hint’s of that influence as well as touches of Sun-Ra, Bobby Hutcherson, Alice Coltrane (Dean’s own ‘Galaxy In Leimert’ is inspired, influenced by Alice Coltrane’s harp-piano spiritualist ‘Galaxy Around Olodumore’), Clive Zanda, Nate Morgan (especially ‘Mrafu’), Nduduzo Makhathini, Mango Santamaria and Pharaoh Sanders.

This grand sweeping cosmology (well, the last third of it anyway) takes a turn towards hip-hop, with Dean rapping over, in some cases, his own jazzier tracks. Like in the style of the late J. Dilla, even Madlib, these groundings are often chopped up, looped, slowed down and reconfigured: The shadowy but celestial mirage ‘Abyss’ reminded me a little of cLOUDEAD. It’s a congruous but expansive turn that takes on a whole different mood, rhythm and cadence; becoming more like a rap album then a wholly jazz orientated one: And for that it works well.

The Primordial Waters have been stirred up to create a grand scheme of spiritual, ancestral inspiration. Multi-layered with titles that in themselves encourage further study – naming a pantheon of African gods -, this is a wonderfully executed work of free-flowing picturesque and more turbulent beauty. If I believed in those fatuous scoring systems used by so many rival sites, this would be a nine out of ten: awarded not just for effect but effort too.