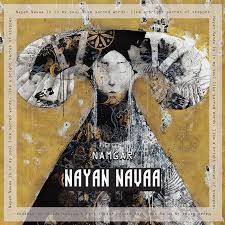 In act of preservation, the Moscow-based troupe Namgar (named after the band’s focal siren Namgar Lhasaranova) electrifies the atavistic sounds and songs of the ethnic Russian Buryats communities on another astonishing eclectic album.

Transporting us to the vast open ranges of the Southern Siberian steppes, on a border junction between Russia, Mongolia and China, the group revitalize traditional hunting and dancing rituals, ring cycle songs, sagacious advice and folk music (some buried in the St. Petersburg archives) with a sweep of trip-hop, trance-y ambient atmospheres and gnarled rock music.

At the centre of this pretty unique fusion that simultaneously evokes all parts and neighboring regions, but also the Orient, Arabian, African and even the Australian Outback, is the extraordinary voiced Namgar, who’s vocals gently fill the expanses with dramatic and beautiful effect. A daughter of the Buryat nomads, brought up in the unforgiving landscape and travails of a hardy life, the ‘petite frame’ singer channels the ancestors respectively, yet offers a certain contemporary, open-minded layer that fluctuates between stirrings of Lisa Gerrad and Alexandra Zhuravleva of the Russian rural trip-hop duo The Grus: only even more beautiful, scenic and magical.

That ancestry, which forms the foundations and backdrop for Nayan Navaa (translated as ‘land of our ancestors’), is both epic and mystical. The mystical part is down to the Buryat peoples’ practice of Tibetan Shamanism, and that allured spell of something mysterious, esoteric, is conjured up throughout this often cinematic lens songbook.

The old recognized sounds of the bowed, quivered, trembled 13 stringed ‘yatog’ zither, the 3 stringed ‘chanza’ lute, 2 string ‘morin khaur’ and twanged spring of the ‘khomus’ styled Jew’s harp are merged with modern post-punk and art-rock guitar, splashed and tom patted drums, synthesized mists and vapours and churned beats. And the old prayers, poems are lifted and given a new gravity: a new life. Certain meanings, sentiments are subtly changed from the heavily patriarchal slanted traditions, but the language, metaphors remain faithful. A high altitude apple tree for example represents a fine beauty on the whispered voice that eventually soars ‘Urda Uula’ (or ‘South Mountain’): “On the top of the southern mountain, Slender, flexible apple trees, filled up to the top with fruits, Sway magnificently.”

The Burayt language is included in the list of endangered languages in the world, but with this group’s mission of keeping it alive, it sounds anything but lost. For this latest effort resoundingly succeeds in breathing a new sensibility, dynamism and air of mysticism into an ancient culture.