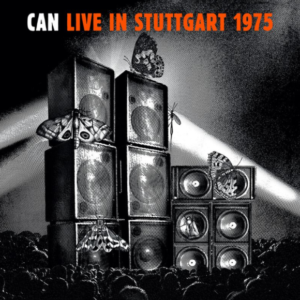 It’s 1975 and Cologne’s lauded cosmic couriers of omnivorous experimental rock Can are beamed into the living rooms of an unsuspecting late-shift British audience, tuned into whispering Bob Harris’s presented Old Gray Whistle Test. The hippie on flying saucer oscillating keyboards is wearing Barbarella’s chainmail, and the Teutonic mustachioed Asterix character on bass is dressed like a biker gang mime-artist sheriff, as the quartet conjures up both a mystifying and explosive tumult vision of ‘Vernal Equinox’: the Landed album’s peregrination epic sonic set piece.

For many this will have been the ‘moment’; their first “what the fuck’ exposure of a band already seven years into a career that generally remained underground, confined to the ‘heads’ until ’72 and the relative successes of both the Tago Mago and Ege Bamyasi albums and the single ‘Spoon’ (which sold 300,000 copies after featuring as the signature theme for the popular German television thriller Das Messer).

It’s 1975 and a time of change, new horizons as it were, for Can. Signing only the year before for the hippie Svengali Richard Branson’s Virgin label, the first few months of ’75 were spent, in between touring, recording the group’s sixth studio album proper, Landed. Following in the lunar radiance of Soon Over Babaluma, Landed marked a number of alterations. For one thing they brought in Olaf Kubler, who’d fallen out big time with Amon Düül II’s John Weinzierl, to perform swaddled sultry and squawking prompt tenor saxophone (namely on the ‘Red Hot Indians’ album track) and asked their friend and author journalist Peter Gilmour to co-write the album’s opening track ‘Full Moon On The Highway’, and the more languid, sedate ‘Half Past One’.

The direction of that album is almost glam, Floydian and polished in contrast to earlier records. In part this was down to certain stipulations in the record contract, with an upgrade in recording apparatus that made it possible to use more multi-tracking and break the band’s cardinal rule of overdubs. Yet Landed, caught between rosy-lipped avant-garde Weimar hedonism and a strung-out, scuzzed Roxy Music, still had its share of incredible cosmic adventures: The already mentioned Alpha 77 vessel emitting ‘Vernal Equinox’ for one.

In one of the most unlikely episodes from rock’s back pages Can are said to have trailed the idea of inviting the troubled American folk troubadour Tim Hardin to front them. He lasted all of two gig dates in the UK during the November of ’75. Though its rumoured he was never formerly asked, nor even realistically considered for the role, he managed performances at the Hatfield Poly and the Drury Lane Theatre before spectacularly falling out with his German partners: a bust-up that’s said to have involved Hardin throwing a TV set at a car window – look out! The fatalistic folkie was after all a former marine. With too much ‘Peking ‘O’ for his own good, Hardin would eventually succumb to his heroin addiction: taking an overdose five years later.

It’s 1975 and Can take to the stage in Stuttgart; never once believing that forty-six years later the fruits of that freeform jam would eventually form the contents of the record you now have in your hands (if you’re lucky); the first official sanctioned live Can album proper.

It’s now 2021 and Can custodians Spoon Records in conjunction with Mute are set to release later this month the most anticipated album in the group’s history since the mind bending Lost Tapes archives in 2012.

Live In Stuttgart 1975 is the inaugural release in a series of saved and reconditioned live albums; the source of which derived from bootlegs provided by Can nut Andrew Hall – just when you wait fifty odd years for one live album, along comes a whole series of them; though don’t expect anything to turn up from the band’s inaugural years in the late 60s.

It worked out rather fortuitous for Hall, as Can’s own attempts to record their live concerts were constantly fraught by technical fuck-ups: not just gremlins, but Gizmo pissing in the works. Rob Young, author of a recent sanctioned tome on the band and linear notes contributor on this record, informs us of a litany of such failed attempts: In ’72 at the legendary concert at Cologne’s Sporthalle a mobile recording unit outside the venue succumbed to fickle technical glitches, leaving only the poor sound quality of camera mics inside the arena to pick up the performance (quite poorly as it transpired), and in Edinburgh in ’73, whilst really making an effort to capture their first live album venture, the multi-track recordings had completely failed to pick up Karoli’s visionary prodigious guitar playing.

Run through a modern technical wringer as it were by the band’s only remaining founder member Irmin Schmidt, and producer/engineer René Tinner, that forty-six year old performance now sounds anything but an artifact; lifeless and dull. Scrubbed up well, in good shape, Can’s ’75 live peregrinations still echo a future that hasn’t arrived.

In five parts, Can riff, take to town set pieces that seem to make some connection to, and transform the Landed album material. There’s also glimpses in the more baggy, loosened quasi-reggae gait parts to what was to come: the group’s next album for Virgin, Flow Motion for one, but also ‘A Spectacle’ from the even later self-titled album of ’79. The Stuttgart recordings however pull you in with the incipient worldly intergalactic soul-funk opening jam, which travels light years from Schmidt’s crystalized Gallo cathedral rays to Persian exotic meanders and Cosmic Slop era Funkadelic jiggle and sway grooving guitar riffage. Within that theatre of amorphous influences you can pick up hints also of Landed’s ‘Red Hot Indians’ and the ethnography alchemist traverses of Saw Delight (another release on the Virgin slate). Funk chops, a sort of whomp like bass and Jaki Liebezeit’s chuffing steam locomotive metronome come barrage drum rolls, all builds towards one of Can’s famed (as Young calls it) ‘white drawf’ sonic meltdown moments, nicknamed ‘Godzillas’. It’s a stoned, gauzy vibe that’s similar to the bootlegged University Of Essex concert material.

The audience, who seem a pretty polite lot, clap in appreciation at this display of acid-rock and beyond, as Can now slip into a more sauntered groove vision reminisce of the ‘Future Days’ and ‘Bel Air’ moiety and the Landed tracks ‘Hunters And Collectors’ and ‘Half Past One’ (albeit via John Peel’s legendary sessions version). On this second interstellar syncopation voyage, Schmidt’s keyboards apparatus actually threatens to take off; oscillating like a UFO towards the Forbidden Planet.

The third venture offers up light dappled square waves and quivers and a more relaxed bluesy psych guitar meandering from Karoli (bordering on the Grateful Dead and even Quicksiliver Messenger Service) before building up towards an erratic polka turn cavalry charge of drums and primal heavy rock.

Stirrings of fellow cosmic explorers and compatriots Ash Ra Tempel mingle with Pink Floyd and Santana on the leviathan space craft circling fourth installment of this live thrill – that same spaceship sounds like it goes onto ditch into an entanglement of sonic distress.

Like a paranormal Fugs the finale part of this live vision drums up some esoteric spooks (walking across ghost house floorboards) and primal avant-garde boogying. It all begins with a sonorous foghorn, a rumble and strange but lovely cascaded waltz. Yet after various changes and noodling lands back in the crypt. The whole set is an example of relaxed intensity.

I’d proffer that this was a more loosened, sagacious Can at the height of their prowess; still inventive yet held and concentrated in exploring the ever-widening boundaries of experimental rock music and beyond. You can hear Can searching for that next leap into the unknown however; never quite breaking with the United Artists epoch, and in between the total embrace of the more languid, tropical wash and reggae of Flow Motion, and the worldly Saw Delight albums. Still, only four years away from packing in touring completely, the Stuttgart Live recordings are as close as any of us will ever have got to experience Can’s full-untethered force of Sci-Fi acid rock on stage. It just seems so crazy that we’ve had to wait so bloody long for it!