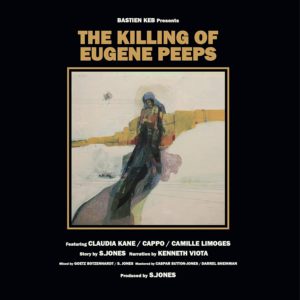 The soundtrack to an American-noir-meets-Jackie Brown-meets-cross-continental-cult-60s movie that’s playing out in the head of Sebastian Jones, this ambitious suite of partly lulled and narrated cinematics, instrumentals and set pieces is as diaphanous as it is mournful. With a wide lens Jones (under the nom de plume of Bastien Keb) languidly drip feeds his fatigued melancholy, anxieties and deepest thoughts through a sorry tale of death and despair; as unveiled by a gonzo/Burroughs monologue style gumshoe, and sung, cooed by a fragile soul.

An ode we’re told to Italian Gallo paperbacks on screen, crime flicks of many other kinds and French New Wave cinema, The Killing Of Eugene Peeps mixes genres and influences up into a nostalgic opus that also has something to say about the draining mental stresses and indolent fatalism of the modern world too. Jones, using music as some kind of therapeutic outpouring, impressively managed to find the strength and will to create this impressive (if downbeat and aching) album whilst working a hard slog in a warehouse each night: The exhausting effects of which Jones says turned him into a zombie for a year.

The talented multi-instrumentalist, apart from guest spots by Kenneth Viota, Cappo and Camille Imogues, even played, recorded and produced this whole album single-handedly.

A work in three parts (the film score, soundtrack and incidental music), the dead-body-in-the-room Peeps is not so much told as a murder mystery but dissected in the form of soliloquys and resigned derisions on how this sad tragic event unfolded.

There’s plenty of title riffing on those crime flick inspirations, and musically Jones uses a leitmotif of nods to Lalo Schifrin, Issac Hayes, Alessandro Alessandroni and Krzysztof. A recurring San Fran/New York 70s detective movie and TV sound can he heard on the opening ‘Main Title’, which sounds like Hayes conducting an elegiac Corleone death march side-by-side with a New Orleans band, as a proto Tom Waits drawled figure narrates our city skyline information. Yet musically Jones moves on with the very next track, the soulful oozing pained ‘Lucky (Oldest Grave)’, which has an air of both a choral Clouddead (especially Yoni Wolf) and TV On The Radio about it. Sometimes the vocals are double-tracked, with one track being slurred as to sound almost drugged and lethargic. By the time we reach ‘Theme for An Old Man’ the brass and timpani detective noir is mixed seamlessly with jazz, soul and trip-hop (imagine Four Tet playing around with Portishead). And then the dreamy fluty gauze of ‘All That Love In Your Heart’ evokes some kind of 60s Italian or French flashback.

A jazzy vision of Mike Patten and Jean-Claude Vannier’s creative partnership one moment, a wah-wah soul maverick cop score the next, Jones eclectic musicianship produces a modern noir both poignant and clever. All those various strands are pulled together for a sophisticated despair and eulogy, but also curiosity. This is a most beautiful, ambitious if often traumatic inquiry of a fully released drama, a filmic album of great depth and scope that has Jones channel his personal struggles to the soundtrack of poignant drama.