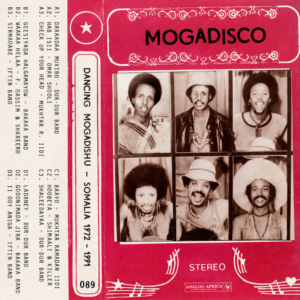 In the making since a security nightmare of a trip in 2016, Analog Africa’s chief instigator, Samy Ben Redjeb, finally releases a treasure trove of previously unreleased and passed-over nuggets from the vaults of Radio Mogadishu.
Researched and compiled on that same crate and archive-digging excursion, Analog Africa put out a celebratory compilation of the first two albums by Mogadishu’s legends-in-exile the Dur-Dur Band in 2018; the first bonafide release of the group’s tape cassette ‘volume’ albums. The infectious loose-limbed funk and fuzz pop group provide a trio of sweetly laced movers and serenades for this showcase of Somali wonders. All recorded in 1991, the last year this compilation covers, whilst exiled abroad, the Dur-Dur Band offer a stick-rattling feverish Indian summer love paean (‘Daradara Muxibo’), slicker dabbing mid-tempo funk workout (‘Shaleedayaa’) and oriental dappled-organ swoon (‘Ladaa’).

Covering a generational period arc, from the burgeoning optimistic dawn of Somali under the dictatorial leadership of Siad Barre to that same leader’s fateful swan song in 1991, as a once more liberal regime in just twenty years lurched towards the repressive, Mogadisco reflects the changes in a fractious state. Barre of course took power in a coup (though with an emphasis on the peaceful), yet the arts and music scenes flourished, with an explosion in both state-sanctioned and private bands. Many of the acts on this collection were hot-housed in the various ministerial department affiliated show bands or in the theatre (notably the Dur-Durs), and were open to outside influences, from Flea Kuti’s Afrobeat sensation – brought back, we’re told, to Somalia by the Mogadishu featured Iftin Band, after representing the country at the Festac Festival in Lagos in 1977 – to Bob Marley’s global-conquering brand of reggae, and later on, a moonwalking Michael Jackson. One of the most obvious of these, and continuing to influence Somalia’s finest in the second half of the 80s, Omar Shooli’s spiritually voiced ‘Hob Isii’ languorously sways to a proto-Wailers rock steady beat. Equally the influence of Motown, Stax, and as the compilation’s title makes apparent, disco can be heard ringing loudly throughout this mixed bag that Samy himself describes as music that “swam against the tide”.

Before Somalia imploded in the 90s and descended into a near anarchic state, the capital enjoyed a tourist boom; the Mogadishu boulevards loaded with ever-luxurious hotels, all playing host to the country’s best and most popular groups. Mogadisco however, selects previously dormant and forgotten recordings from the city’s top broadcaster, Radio Mogadishu. Filed away under ‘mainly instrumental and strange music’, an assortment of discarded jingles, background music, interludes, TV show tunes and theatre numbers now finally see daylight on an eye-opening collection of exotic funk-fried shufflers and sashaying Afro-Caribbean swoons.

Notable mentions should go to the Iftin Band for their Ethno-jazz dreamy shimmer ‘Ii Ouy Aniga’, both the Bakaka Band’s uptown rankin’ slinky ‘Gobonimada Jira’ – think the Lijadu Sisters meet Althea & Donna – and their swimmingly spy-thriller like transformation of a warrior’s song, the tropical Highlife tingle ‘Geesiyada Halgamayow’, and the southern ‘Orleans flavoured raunchy disco turn, ‘Baayo’, by Mukhtar Ramadan Iidi – a slicker 80s Arthur Conley if you will.
As always, the usual due diligence and insights into each and every artist/band and label on this latest brilliant compilation are chronicled in the accompanying booklet; a purview of Somalia’s musical legacy set within a tumultuous historical setting. Analog Africa are the first label to actually set foot in the country in years; the capital especially immortalized for a generation or more as one of the most dangerous places on Earth, synonymous for fractions-at-war and pirates. Progress has been made in recent years, hence Samy gaining permission to visit, albeit under heavy protection. For once though, here’s a celebration of the country’s music; a fit and proper essential joyful showcase of disco and funk inspired dynamism.