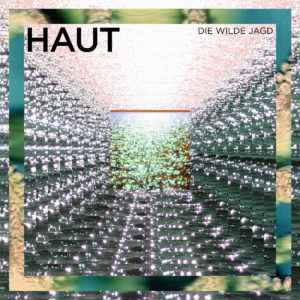 Birthed into another chthonian landscape of incipient stirrings, Sebastian Lee Philipp’s third such ambitious experimental suite continues where the previous eerie 2018 LP, Uhrwald Orange, left off: Lurking, stalking and disappearing into a recondite mystery of esoteric electronica and Techno. Earthy then, with evocations of a wild, veiled terrain populated by the whispering bewitched, strange rituals and metaphysical forces, Haut is a brilliantly realized slow-burning expansive supernatural soundtrack imbued with elements of Krautrock, Kosmische, the psychedelic, avant-garde, industrial and atavistic.

Once more joined by co-producer foil Ralf Beck – absent on Phillipp’s more or less solo outing, Uhrwald Orange – and live performance drummer Ran Levari, Die Wilde Jagd’s instigator songwriter/producer channels notions of memory, premonition and birth into a filmic quartet of drawn-out chapters. The opening minor-opus ‘Empfang’, which translates as “reception”, takes its time to emerge from the undergrowth; four minutes of ambient throbs, finger cymbal chimes and daemonic slithers before the first signs of Levari’s drum kit kicks in and takes off like a communion of Daniel Lanois and the Chemical Brothers. All the while sounds from the wilderness – like a crow’s croak and a regular occurring cold wind – encroach on the live instrumentation and sonic bed of synthesized pulses and motions. By the end of this thirteen-minute offering the magical Germanic-folk song of special guest vocalist Nina Siegler pricks the ominous chills to bleed over into the album’s, and project’s, only duet, ‘Himmelfahrten’.

Not so much a change in scenery as a mantra Whicker Man maypole entanglement between the Maid of Orleans and Philipp, the ‘ascent’ – as it translates into English – is part ritual, part ceremonial procession. Owl totems hoot on a hypnotic sweet chorus conjunction that invokes the Velvet Underground, GOAT, Acid Mothers Temple and Perpetuum Mobile period Einsturzende Neubauten.

‘Gondel’ – which doesn’t the lexicon to work out means “gondola” -, with its toiled, less rhythmic drumming reminded me of Jean-Hervé Perron and Zappi Diermaier’s more modern Faust partnership. A percussive rich mystery, echoes of operatic voices linger in what sounds like a very windy passage way.

There’s a pendulous motion to the album’s abstracted finale, ‘Sankt Damin’ – which I think is St. Damian, one half of the canonized Arab twin physicians who plied their trade for free on the Syrian coastline; two of the earliest Christian martyrs. Somewhere between courtly Medieval and the more ancient, there’s a whiff of the Dead Skeletons and the Velvets Byzantium vapours on this wispy blown stark wandering.

It’s certainly an imaginative world that awaits the listener on the Die Wilde Jagd’s third grandiose experiment. One that takes a breather, holding back on the beats and kicks for a more expansive and creeping sound production; those anticipated reveals kept on a tight rein. A sign of real quality and patience, Haut marks both a continuation but slight change in the dynamics as Philipp and Beck further erode and stretch the perimeters of Techno and electronic music.