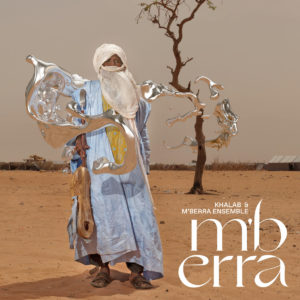 Treating the hypnotizing and often mystical voices and music of the Tuareg with a less intrusive style of congruous trance, loops, re-contextualized captured moments and sophisticated synthesized effects, the Italian polymath (producer, DJ, author, broadcaster on Italy’s national radio station Rai Radioz) Raffaele Costantino, aka Khalab, approaches his collaboration with musicians from the M’ Berra Refugee Camp with a great sensitivity and respect.

On Khalab’s latest African partnership, this time with Arab and Tuareg members of the sprawling tented refuge, he draws attention to yet another sorry tale of forced dispossession; highlighting the plight and limbo status of the 60,000 Malian refugees stuck since 2012 over the border in neighboring Mauritania. In the ongoing, but only the most recent wave of fighting in Mali, many people have abandoned their homes in the desert bordered regions of the country, many caught up in the Tuareg’s near seventy-year fight for an autonomous state within the north-eastern reaches of Mali: known as the Azawad.

A review like this can’t hope to do the subject matter of this struggle justice or devote the space to all the atrocities and convoluted history, but in brief the Tuareg’s heritage is often opaque, with even the name argued over by etymologists: There are many in the community that would rather the term disappeared, preferring instead to use ‘Kel Tamashek’.  A loose confederacy in one way of atavistic tribes, with a lineage to the Berber, who can be found throughout north and western Africa, the Tuareg have lived in Mali for a considerable time: centuries. In the last decade their fight against the Mali government over rights, representation and self-determination was hijacked by a boosted insurgency of international Islamic militants affiliated to ISIL. This ill-fated campaign nevertheless gained a lot of ground in its early stages, including the legendary ancient hub of learning and trade, Timbuktu; overwhelming the Mali government forces, who were forced to seek help from former colonial masters France. This intervention was semi-successful in stopping the momentum, and managed to gain much of the ground lost: however unstable that remains. It also didn’t help the cause when those Islamist forces more or less turned on the Tuareg Liberation groups.

Switching to terrorist guerilla tactics (including bombings), but still a major force to be reckoned with, the Islamist fighters have since spread mayhem to Mali’s neighbours in the region. The situation is made worse by an internal crisis in government in Mali (a coup last year brought in a still going, but unstable, interim government that is supposed to step down when elections can be held).

In this tumult of insecurity, is it any wonder Malians have fled?

Being a musician in this volatile environment has proved especially dangerous. Just last month on the blog we featured the Malian artist Anansy Cissé and his new album Anoura, which was put back by a culmination of problems that included a kidnapping and beating on the way to play at a festival in the country. It’s a common, shared experience of nearly everyone you speak to from the music community in Mali, who are trying desperately to eke out a living: many forced to abandon their homes for sanctuary in less dangerous parts of Africa, even the world.

Camped out in the Mauritania land of the lyrical griot storyteller, the many known and also fairly obscure musicians and singers that feature on this project are examples of this forced exodus. Featuring members of the Tamasheq speaking Tartit ensemble alongside others from the Arab and Tuareg communities, stories and harsh realities are voiced on an attuned album of desert song otherworldliness, the dreamy and rustic, earthy. Khalab having worked with an eclectic array of musical partners over the years, including the Malian percussionist maestro Baba Sissoko, takes his collaboration very seriously indeed; taking, we’re told, reverential ‘guidance’ from Tuareg ethnologist Barbara Fiore.

An entwined production of Tuareg roots and subtle (for the most part) electronica, Khalab takes the essence, sometimes just strands or excerpts of the source material and adds a sense of both Afro-Futurism and the cosmically trance-y. In similar sonic territory to Kutiman, Invisible System, Ammar 808 (at his most sub-bass frequency vibrating best) and even last year’s Vodou Alétreatment by Belgian electronic duo The Ångströmers of the Chouk Bwa troupe’s Haiti traditions, this vivid transformation sometimes offers the most translucent of electronic pulses, reverberations and washes to a stringy, spindled, trinket ringing and tinkering cattle trail wandering of and both the spiritual and aching messages of the Tuareg.

Some tracks seem to be just a gauzy atmospheric soundtrack memory of the nomadic life, whilst other performances are beefed-up with slow but punchy drum breaks. Polygon Kosmische synth shapes appear with rhythmic patter Techno on the looped buoyant motion (with a touch of Hailu Mergia keyboards) ‘Curfew’, and there’s a soulful House Music club groove that sits beneath a Modou Moctar like blues mirage on the festival sampled ‘Reste A L’Ombre’. Talking of Moctar, you can hear many similar echoes of the desert rock ‘n’ roll, blues vibe of groups like Tinariwen and Tamikrest; which is unsurprising as the members of Tartit who appear on this record share a similar heritage, roamed the same Timbuktu, Kidal and Gao trails.

Khalab knows when to let his partners breath, and even perform more or less without any additional synthesized effects or production; leaving the final say to a most beautiful hypnotizing, wandering desert yearned outro from the camp’s gifted primal blues players. Despite the crisis this project was born out of, Khalab and M’Berra Ensemble prove a transportive combination of imaginative, emotive and authentic Tuareg music and contemporary electronic sonic techniques. The music of displacement and anguish has seldom sounded so spellbinding and cosmic.