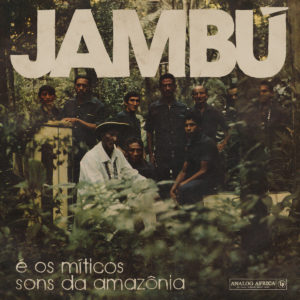 As varied and fertile as the numerous diverse waterways that pour into its Amazonian basin geography, and cultures that arrive (either forcibly via the Atlantic slave trade corridor or through mutual trade) by the boat load on its tide, the Brazilian port city of Belém proves an abundant spring of polygenesis discoveries. Returning to the South American continent to showcase the music and story of this important trading post, the northern state of Pará hub, “enveloped by the mystical wonders of the Amazonian forest”, bridged a myriad of communities and musical genres, developing, but often, creating wholly unique styles.

Cross-fertilizing multiple languages, traditions, embracing both imported African and indigenous religions and ritual, and straddling the delta, port and forest environments the Belém pulse can, however, be whittled down to a quartet of distinctive rhythms: Carimbó, Siriá, Lambada and the witchcraft fusion offshoot of the Afro-Brazilian practiced Macumba, “mironga”. There’s of course plenty more (Lundon, Banguê) but this latest compilation from the Analog Africa label concentrates on those particular movements – an accompanying 44-page booklet outlines and details the full provenance…where it can be established that is.

Like an old trusted returning friend, the star of the label’s 2014 Siriá album, Mestre Cupijóe is included once more on the Jambú e Os Míticos Sons Da Amazônia collection. With a sound incubated on the shores of the Tocantini River, in the legendary Quilombos settlement originally founded by escaped slaves, Cupijó’s modernised version of the local rambunctious music he made famous was funnelled through the Belém clubs and studios to produce (what I called at the time) a sound that can only be described as a Sicilian funeral procession band gatecrashing a Mexican wedding party. A 1973 recorded performance from the Favela nightspot in Cametá of the song ‘Despedida’ (“Farewell”) is no different in that respect: slightly more woozy but just as brilliantly shambling and loose.  It’s also the very first modern Siriá recording of its kind. 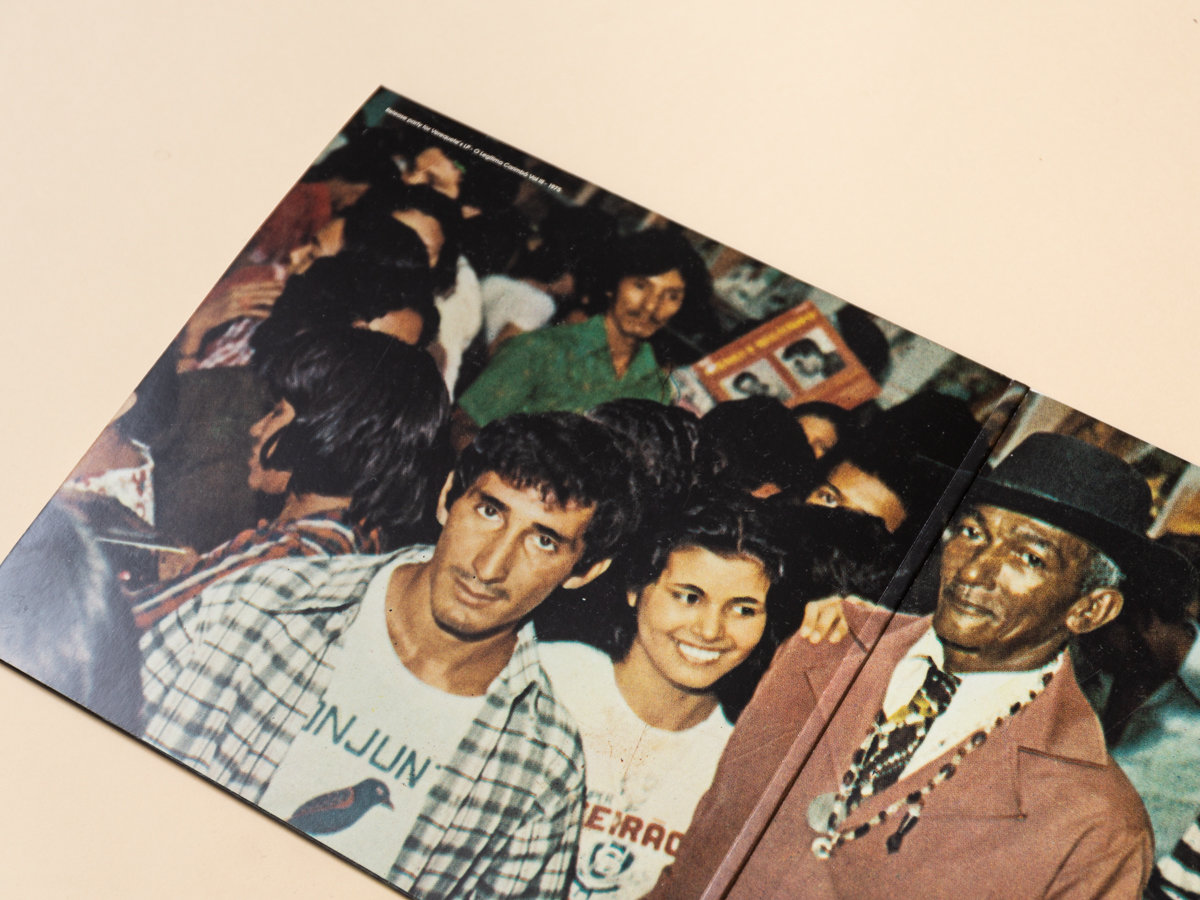 Legends of the electrified Carimbó are numerous. A style with folkloric roots, though there is much debate as to its origins, Carimbó is split between those who adhere to its heritage and those who amp it up and give it some oomph! One such energetic fella, singer/composer/bandleader Aurino Quirino Gonçalves, otherwise known as Pinduca – a nickname that refers to the signature assortment of ornaments that hung from his massive straw hat –, took the style to an international audience with his energetic, quickened take on the highly popular music. Represented by a trio of signature scuffled shufflers, Pinduca’s tropical itchy, humming bassline, goer ‘Vamos Farrear’, wobbly Afro-Brazilian quivery supernatural cult ‘Pai Xangô’, and slicker turn ‘Coco Da Bahia’ are all suffused with effortless balmy energy and constantly infectious moving percussion. What a find!

A real family affair, Pinduca’s brother Pim can be heard as the vocalist on the reckless careering down the train-tracks motioned ‘Von Andorinha’. Part of the Grupo da Pesoda rock band, who were more used to turning out Bolero and Mambo before being encouraged to reinvent themselves as a Carimbó band, Pim would leave to pursue a successful solo career.

Another icon of the Carimbó style that plays such a prominent role on this compilation is the “King of Carimbó” (no less) Augusto Gomes Rodrigues, otherwise known by his stage name of “Verequete” – a reference to the Vodun divinity that featured in the ceremonial song ‘Choma Verequete’.  Through many travails the renowned composer and influencer spent years carving out a living – with jobs as diverse and hard-laboured as a butcher, chef and lumberjack – in the wilderness until releasing his family-band debut in 1970. Two of the troupe’s signature “stick and chord” driven rattlers are included on this collection; the rustic, tumbling lively ‘Mambo Assanhado’ and jungle march ‘Da Garrafa Uma Pinga’. 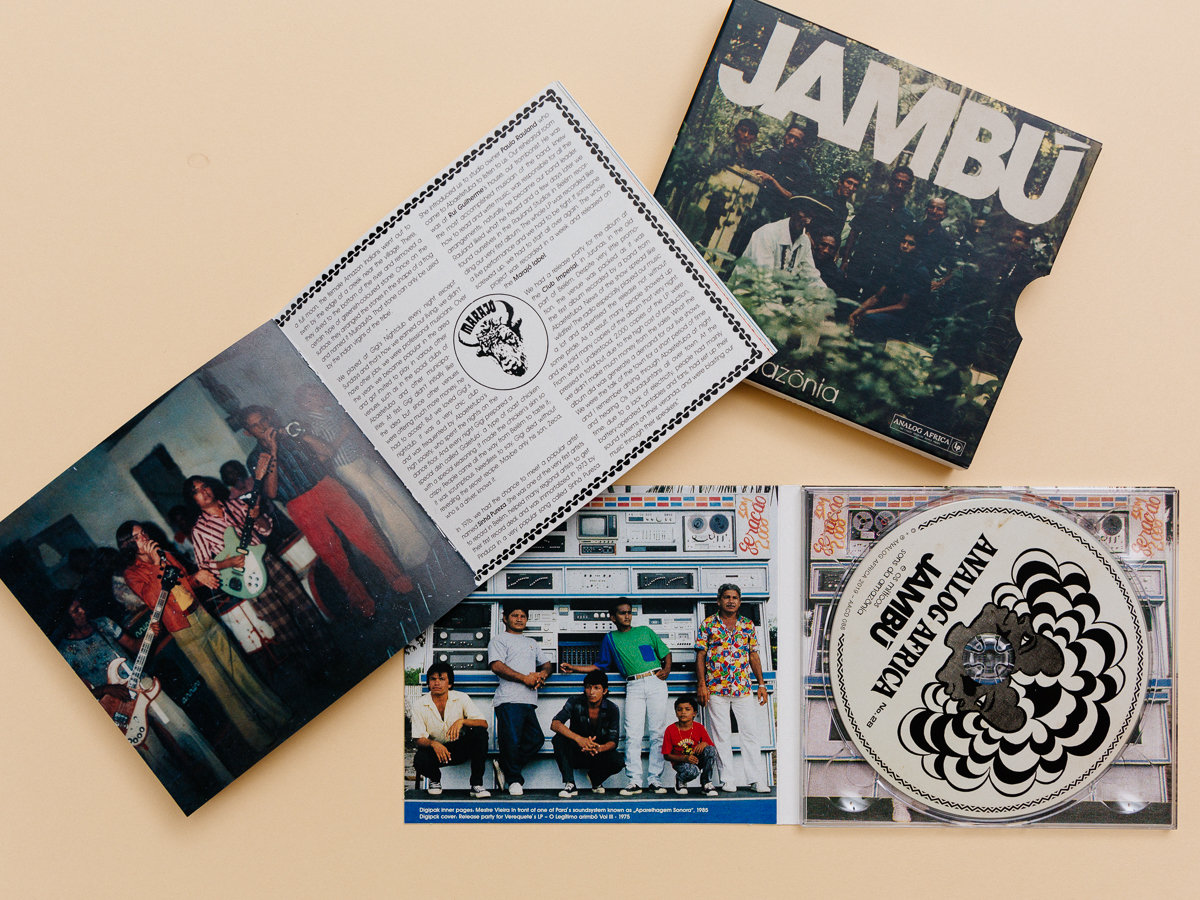 Meanwhile, representing if not inventing the Lambada is another legend in the Belém story, Vieira. This virtuoso multi-instrumentalist who swapped the banjo and mandolin for an electric guitar, fused bits of Mambo, Choro, Samba and Merengue together to create a unique, sweet-toned dance sensation. The larger-than-life actor of the fabled Bye Bye Brazil movie, Janjâo offers a one-track glimpse into the bewitching “Mironga” sound on the harp-like spellbinding Western ‘Meu Barquinho’. Mironga of course has its origins in the mystique of the slave imported Macumba religion; the deities of which, the strong figure of aggression and resistance, Xangô, and mother of oceans (and safe passage), Yemanjá, are invoked not only in the songs of this towering presence but across Belém and South America.

Brought to the attention of Analog Africa’s boss, Samy Ben Redjeb, by this collection’s instigator, the Australian crate-digger and producer with Brazilian roots, Carlo Xavier, the magical fusions of Belém prove scintillating, sexy and at times rambunctious fun; a transportive carnival of rhythms and sounds that capture a lesser known part of South American music history; just as alive and dynamic today as it was back in the 1970s.