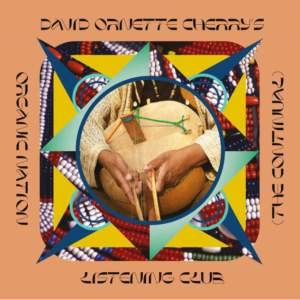 What providence. What two outstanding luminaries to live up to. David Ornette Coleman’s name marks the extraordinary point in time when his trumpet-pioneering father Don Cherry joined forces with jazz deity Ornette Coleman on the 1958 free jazz defining Something Else!!! LP. It was also the year the musical polymath David was born.

Thankfully taken under his father’s wing, nurtured with the same freewheeling ‘cosmic nomad’ spirit, this sagacious scion of an enviable lineage continues to tread a polygenesis pathway on his latest album of on-message peregrination and rhythmic dances. Attuned to the universal vibrations, channeling the ancients and both his father’s African-American and Choctaw roots, the Organic Nation Listening Club bandleader, prompter and navigator lays out an atavistic form of electronic body movement, echoes of Hassell’s amorphous ‘fourth world’ explorations, the astral and, of course, spiritual jazz on the parenthesis entitled The Continual journey.

Almost meandering across continents, you’ll hear the resonated echoes, impressions, twine and spindled sounds of North and West Africa, the Asian sub-continent (a lovely brassy reverberation of sitar and the rhythm of tablas can be heard throughout), the Fertile Crescent and an 80s NYC melting pot on this spiritually enlivened trip. The keen-elbowed viola and tapping beat groove ‘Parallel Experience’, with its West African dun dun drum beat suggests that continent’s mood, yet also spreads its scope towards echoes of Farhot’s reimagined breakbeat visions of Afghanistan. The majestic mountain crust positioned ‘Eagle Play’ takes in musical views of not only the recurring spiritual Indian leitmotif but also Anatolia and Harilu Mergia’s Ethiopia (if put together by J Dilla that is).

Elsewhere David and his human, as well as nature’s chorus of ‘hummingbird’ singing cast embody the untethered soul of Don Cherry’s Om Shanti Om and Eternal Now works (and even a touch of the musical microbe calculus of building blocks and life that you’ll find on Don’s collaboration with Terry Riley, Köln). There’s also the fluted presence of Jeremy Steig, and with the more free jazz, almost improvised interactions between David and his drummer John L. Price, electric piano player Naima Karlsson and trumpeter Paul Simms, a touch of Sam Rivers and the Chicago Underground. Meanwhile, in what is an especially expansive field of instrumentation and influence, Gemi Taylor’s guitar straddles krautrock, jazz and drifted cries of a more ambiguous nature.

From the cosmos to the age of the Pharaohs, the garden of earthly delights to dancing through the tumult of our modern times, the rhythms of life merge with more avant-garde performances of serialism, free jazz and even the psychedelic.

All the while the mood is electric, both of the moment and the past; a both sporadic and flowing set of reincarnations existing in a timeless scene under the guidance of an outstanding musical traveller. Anchored in the history of jazz, but so much more beyond that, David lives up to the family name on another eclectic album of borderless healing and wisdom. Be sure to check in at the global retreat and take heed of the advice.