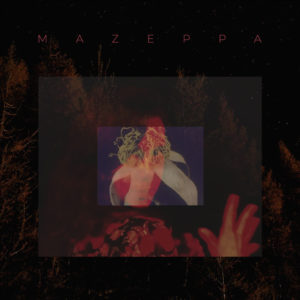 Formed four years ago in the atavistic gateway city of Haifa in Israel, with all its connotations and history, the Mazeppa quartet channel both Middle Eastern mysticism and the intense lyrical verses and prose of the Bohemia-Austrian poet Rainer Maria Rilke on their ambitious debut album. Led by the incredible diaphanous siren voice of Michal Pérez Noy, who both invokes a Kabbalah Patti Smith and Siouxsie Sioux, the band follow up on a string of Mazzy Star meets Byzantium incense burning psychedelic and shoegaze enriched singles (both of which, the rallying, enticing hypnotic esoteric ‘The Way In’, and paisley underground ‘Roses’ are included on this album) with an expansive soundtrack of cosmic grandeur.

Enraptured by the highly influential poetics of the widely travelled and sagacious Rilke, Michal and her musical partners Amir Noy (on drums), Elad Bardes (bass) and Asaf Koren (guitar) originally put the band together to incorporate his searching prose into song; prose that is often itself stirred by the many forms of European Christianity (from Lutheran to Orthodox) and by the vistas of his eventual home in Switzerland.

That source material now sits alongside the burgeoning lyrics of Michal and her band mates on an album of various atmospheric mini-opuses and shorter post-punk, C86, psychedelic, alt-country anthems. I say alt-country, but I mean something wholly in keeping with the band’s roots and home; a tremolo like sweeping evocation of the desert frontiers, with images conjured-up of wandering band members seeking spiritual answers, like Biblical characters under the stars in a mountainous, sandy and arid wilderness.

They keep up a richly, deep and entrancing spell throughout, with nothing labored or strained musically or vocally. In fact even in the crescendos, the moments of crashing dissonance, and even when Michal rouses a fighting shout, the playing is always melodious and controlled.

A magik and romantic wanton gravitas of the spiritual, dreamy and the Gothic, permeates this work of considered poise and wispy drifting. It’s a sound that weaves in and out of washes of the Black Angels, Siouxsie’s Banshees, The Velvet Underground, the Besnard Lakes and the more symphonic examples of 90s Britpop. As heavenly as it is steeped in eastern mysticism, Mazeppa’s debut expands the Israeli band’s scope and ambitions: which I say they’ve more than matched. A passionate, thoughtful but powerful esoteric and more earthly-bound songbook, Mazeppa is already among my highlights in 2021.