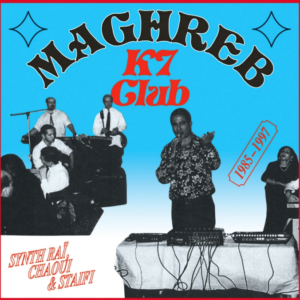 Music from the North African geography of the Maghreb as you’ve probably never heard it; shimmying with Arabian trinkets, rapid tabbing hand drums and exotic sand dune fantasy certainly, yet made otherworldly cosmic and electro-fied for the burgeoning democratized age of affordable low end tech: welcome to the Arabian ex-pat scene in 80s and 90s Lyon. From the assured collators Bongo Joe and, on this compilation, their partners Sofa Records a eight-song collection of Casio-preset and synthesized transformed musical poetry and lovelorn heartache from a myriad of Algerian artist’s that congregated around the French city’s North Eastern African café and bar hub. Joints such as the Le But Café, the Croix-Rousse and Guillotière were home to a social network hive of activity for conducting business and booking appearances for weddings, galas and studio sessions.

Musically a crossover of the Oran City folk Raï tradition and Zendari rhythm festive Staifi style from back home, the electrified sounds that emanated from this fertile scene were mostly distributed on cassettes, released by facilitators like Top Music, Édition Merabet and SEDICAV. Extraordinarily, and the reason for this collection, vinyl was discarded for the cheap and flexible culture of tape sharing at the time. The fast turnover, not only in recording these tracks but also in getting them on the market, cut out the middleman and helped foster a thriving local distribution network. Still, the power seemed to be with the publishers who could not only modify the lyrics but tamper with the style itself – adding synthesizer and drums – without seeking consent or even running it by the artists that recorded them. This led to some interesting results, as you’ll hear. For the first time ever, the Maghreb K7 Club LP makes available a smattering of tracks on vinyl; tunes like the Arabian milky way swish ‘Maliky a Malik’ by Zaidi El Batni – which has a strange intro; someone’s footsteps walking through a cheap echo-chamber effect and some slapping – and the bandy, slinky liquid pop mirage with soothing female sighs ‘Goultili Bye Bye’ by funk-disco maestro Nordine Staïfi. Nordine gets two bites of the dancefloor glazed cherry on this album; his second feature, the infectious whistle-and-clap ‘Zine Ezzinet’ is a standout highlight – imagine an Arabian Nile Rodgers mixing down an Orange Juice funk.

Elsewhere, 808 rattles and harmonium merge with spirited song, whilst heavy accentuated Algerian romanticism is augmented by a Miami soundclash of electro beats. Though the most blatant use of that synthesizer influence is found with Salah El Annabi’s Francophone ‘Hata Fi Annabi’, which unexpectedly drops in a whole chunk of Jean-Michel Jarre’s famous ‘Oxygene’ to the mix.
The 90s sourced tracks in this collection are for obvious reasons more polished, but there’s a certain innocence and fuzzy sheen that I quite like about those older, 80s recordings.
Worth a punt just to own ‘Zine Ezzinet’ – fast becoming one of my favourite, essential movers of the year -, this compilation from Bongo Joe and friends is a wonderful platform to discover another bit of ear-opening musical history.