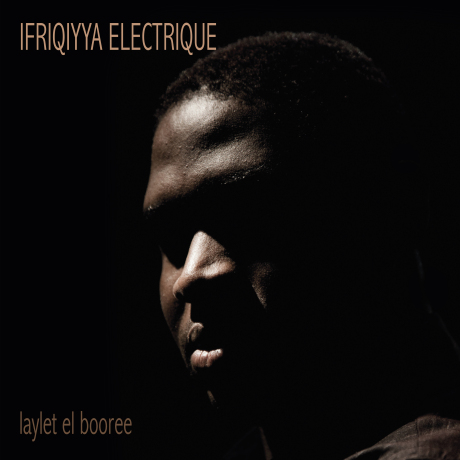 Once more into the furnace of voluminous excitations and ritual, the collaborative Ifriqiyya Electrique project that merges Sufi like trance and spirit possession performance from the atavistic mystical depths of Southern Tunisia with grinding deconstructive industrial post-punk from the West, builds on the foundations of the electrifying 2017 debut, Rûwâhîne.

With a slight change in personal, but still led by the musical union’s chief instigators Gianna Greco and François R. Cambuzat, the Electrique broaden the perimeters on their latest intense chthonian frantic exploration of the religious ritual ‘Banga’, Laylet el Booree. Joining the constant scrapped and rattling tin chorus of ‘tchektchekas’ hand percussion and shared exaltation chanting vocals new recruit Fatma Chabbi throws herself into the tumult storm that at times resembles an excitable communion between NIN, Einstünzende Neubauten, Tago Mago era Can and the Tunisian spirit world.

Redefining what it means to totally immerse one self in exotic, often arcane mystical cultures, Mediterranean punk and avant rock scene stalwarts turn field-recording filmmakers Greco and Cambuzat  – when not combining forces with the enigmatic Lydia Lunch under the Putan Club moniker – confront head-on the psychogeography and music of often volatile regions and cultures – previous excursions include the hotly-contested Kurdish regions of Southern Turkey, and the Uyghur region of China; the predominantly Muslim worshiping ethnic group have made the world news in recent months, a million or so of their community interned in the Chinese authority’s detention camps as the Communist regime seeks to ‘re-educate’ and remove any outside influence, culture or religious adherence from the population –, including the legacy of the original Hausa slave people who elevated the celebrated 13th century Sufi mystic Sidi Marzug to the status of venerated saint. 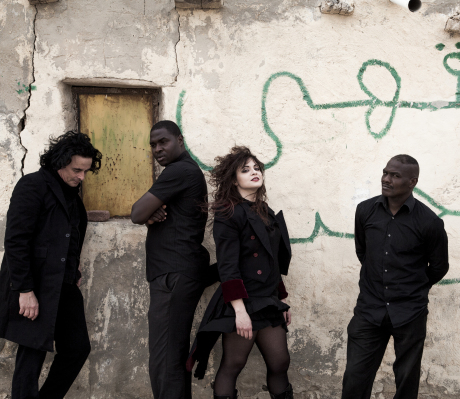 To this day the black communities of Tozeus, Metlaoui and Nefta honour their ancestor, who it is said had at his disposal a retinue, or, “diwan” (“assembly”) of “rûwâhîne” (“spirits”) as allies and servants to call upon through the ritual of Banga. Not so much an “exorcism” as an “adorcism” we’re told, this lively ceremony is meant to placate and calm the spirit who posses the participating initiate. Mesmerized by the hypnotic chanting, drumming dancing performances that accompany it, Greco and Cambuzat moved from bystander documenters to participates; joining the spiritual hubbub by adding a searing, abrasive fuzz, buzz and edgy sawing taste of guitars and effects to the already esoteric experience.

Worried how this hybrid and intrusion would look to the community of the Djerid desert in which it was instigated, the duo and their Electrique company of Hausa collaborators, Tarek Sultan, Yahia Chouchen and Youssef Ghazala performed their debut in the sacred town of Nefta, the sanctuary that holds the body of the “black saint” himself, Sidi Marzug.  Though obviously nervous, the locals recognized a “shared music” when they heard it, giving their seal of approval; this baptism of fire inspiring the desired effect as the locals sang, danced, and even went into a trance. Free of hierarchy and structure the Electrique sits well within the untethered traditions of North Africa, yet this meeting of the brutal industrial sound palette and religious spectacle, though unique, also seems to have wowed and had the desired effect on Western audiences.

The second album, Laylet el Booree, which translates as the “night of the madness”, is just as electrifying, exotic and barracking. Mirroring the stamping, emotive and sometimes confusing hallowed intensity of the adorcist ritual from the Banga followers of Tozeur that this album’s title references, the troupe work themselves up into a fervour: this is after all the night when the spirits “actually” take possession of their initiate’s bodies.

Call-and-response chants and communion echo around in a vortex of rustic percussion, strange computer-generated sounds, static, sparks and two-speed rhythms throughout this equally powerful and heavily atmospheric album. Tracks such as the creepy piano prodded, galley-slave rowed Gothic ‘he eh lalla’ sound like Trent Reznor leading The Bad Seeds across an ominous sandy terrain, whilst the next evocation, ‘beesmellah beedeet’, goes ‘baggy’, and ‘moola nefta’ merges dub with snake-charmer Arabian saz mysticism.

Still locked-in to the trance-like venerations of spirit channeling, the Electrique integrate different rhythmic changes and timings; seeming to experiment even more this time around; pushing the envelope further without losing that original tumultuous barrage of bombarding drums/percussion and edgy growling grinding industrial guitar sounds. If anything they’ve unleashed the spirits to roam the amorphous sphere of exploration to draw on even more diverse musical inspirations, creating a highly unique invigorating sensory experience in the process. Industrial post-punk ritual leaves the furnace once more to cause an explosive cacophony.