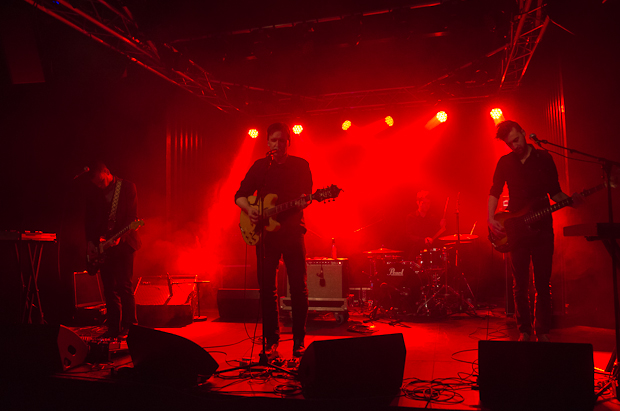 Imagine a venue in a corner of an old freight yard, a handful of people who stand meters away from the stage and here you have the setting for the concert of Sophia in Aarhus, a concert that I have been waiting for ten long years, hijacked by coincidences and fate that for so long did not let me experience the emotions of Robin Proper-Sheppard’s music played live (also) for me.

The first part of the concert focused on the latest album of the band published last year, “As we make our way (Unknown harbour)”, performed in its entirety. The mood is typical Sophia, melancholic and introspective but somehow less dark; maybe it is because of the faster drums, or the bass guitars that sporadically recall Interpol’s riffs, or the crescendo of tracks like “Resisting”, but when it is time for a sunny track like “California” you are somehow prepared and you do not ask yourself “where does this one come from?”.

As soon as “It’s easy to be lonely” ends, it seems that the mandatory part of the concert is over, the thin veil that separates the stage from the audience falls down and finally there is interaction with the crowd – after all, we are more or less sixty attendees: I am really so sorry, Robin, that there are no more people here to appreciate your art – some joke and then we dive in the classics.

Someone from the front line gets over his shyness and asks for “So slow”: here you go man! Just thinking back to the emotive intensity of the interpretation still takes my breath away and twists my guts.
Right after that it’s time for “I left you” and when the song is over, Proper-Sheppard apologizes with the crowd for having messed up with the lyrics: as he explains, the song was written for his daughter’s mother and those emotions still overwhelm him. The crowd, the stage, the show were not there anymore, just ghosts and memories. Being part of such authenticity is always deeply appreciated.

After the mandatory “Oh my love”, the concert comes to an end with the so-called “trilogy of rock” and all the spleen we have experienced since then is seared with a crescendo of powerful sounds.

It is again time to part our ways and I am bringing home, stuck under my skin, emotions that won’t easily fade away, along with the hope that it won’t take other ten years before living them one more time.