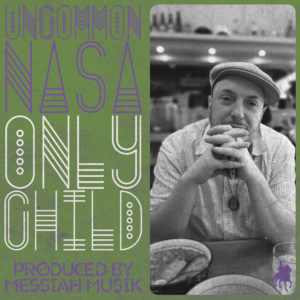 Encompassing the local and surrounding areas of the city he’s never left, the leftfield candid hip-hop artist Uncommon Nasa takes a poignant look back at his roots on his sixth studio album,Only Child. For a rap artist known for their open delivery, this latest soliloquy and sagacious lyrical roll is possibly the most personal yet.

Now into his early forties (the release date is actually the day after Nasa’s 43rd birthday) and as the slurred and slowed down sample on the album track ‘Your Hands will Turn To Rust’ remarks, “I’m the kind of a guy who is now in that ageing late thirty, early forty bracket in which suddenly there is a tremendous bittersweet poignant feeling about wanting to go back to another time…”And so it is the same for Nasa: dispensing wisdom, the short tales of those who made an impact on his life, and the growing pains, memories of those formative years on both Long Island and Staten Island (where he still lives).

The album title describes Nasa’s unique perspective, growing up without siblings; spending a lot of time alone but developing a rich, cerebral imagination, lyrical skills and an eclectic taste in music. Now decades on, and with his long time partner the open-minded reflective rapper runs, meanders and drops lines about all the connections and ‘what ifs?’ About the tropes that so many of us in a similar age bracket (that’s me: the only child) either agonize over or ponder. With no children of his own (again, that’s also me), the lineage stops when Nasa leaves this mortal coil (God forbid!). Although the musical legacy and his view of the world will live on: “If I die, just see it as I did”.

Nasa flies solo on this album: and all the better for it. So many hip-hop artists fill their work with umpteen cameos – the bread and butter of so many emcees, hoping to appeal to a multiple of fans. Only Child is however produced by the Baltimore ‘beat-placer’ Messiah Musik , who lent his trade to Mach-Hommy’s ‘Pray For Haiti’ and cuts by Billy Woods and Quelle Chris. Messiah has worked with Nasa before of course, on the 2014 release, New York Telephone. He now provides a highly atmospheric, often psychedelic, moody and mysterious cosmic soundscape on this brilliant epiphany. Against Nasa’s intelligent trains of consciousness that production proves a congruous fit; subtle, minimal at times, with the most evocative of leftfield jazzy-prog touches. The elemental particle opener, ‘Quark Strangeness In The Hour Of Chaos’, for instance has that echo-y atmosphere of harmonic pining jazzy-prog looseness (bordering on Pink Floyd), as Nasa’s strung-out and just as loose inner thoughts drip and starkly limber up. It actually reminded me a little of Sex And Violence era BDP, with its almost foreboding unveiling of thoughts from a dark tech dystopia.

Already picked up by Monolith Cocktail collaborator Matt Oliver (who also included Nasa’s Kount Fif produced 2019 album, City As School, in our choice albums list) for our monthly revue playlist, precursor single ‘U86’ features some reworked Southeast Asian or Japanese soundtrack; the Oriental bed for a track about tuning into the localized TV station of the title, which offered a window into a whole world of music for a young Nasa, including Tears For Fears. Not shy in conveying his feelings, Nasa raps, “Tears For Fears, I cried when I heard that song, I don’t know why I listened to it for so long.” By the time we reach the Run The Jewels mirage title-track the production has changed to embrace a lunar Peruvian panpipe! Later on, the theme music from some 70s detective or thriller series, accompanied by crunched turning over drum breaks, wraps itself around another album single, ‘Brooklyn Soup’: a psychogeography like walk in the boroughs.

That eclectic ear for a sample, a break, continues with ‘Vincent Crane’; a discovery that Nasa implores as, “just one example of things you should, might know.” The fateful travails of the bi-polar Crane, who spent most of his life in and out of clinics after suffering a mental breakdown during his first tour of the USA with the Crazy World Of Arthur Brown in 1968, permeated an evocative songbook, which decades later left an indelible mark upon Nasa. Before a tragic overdose in 1989, Crane would collaborate with Brown on a “deep cut” album and set up Atomic Rooster with a pre-supergroup ELP Carl Palmer. I think Nasa uses a short piano break from Atomic’s Made In England LP (the introduction before ‘Breathless’) as he waxes lyrical about not only Crane but the common trajectory of all music genres in general over time: “Turns out that if you give a genre a few decades, the same roads are sought.”

Only Child is a mature, often bittersweet, review of a life lived and the characters that made it what it was and is; from Nasa’s parents to the uncompromising figure of ‘Metal Mike’). Nasa goes deep; entangled in a multitude of slipstreamed thoughts and mixed feelings; observations and reflections on the realities of middle age in a society that doesn’t ever want to comprehend their own deaths, let alone grow old. Certain memories pop up and prove relevant in this process, from his mother’s repeated echoing warnings (“If you touch that fence, your hand’s will turn to rust”) to the more innocuous details of his Brooklyn diorama.

It’s not just age that prays on the mind, but the unprecedented times in which we all find ourselves; sixteen months on after the initial Covid lockdowns and fear prevailed miasma of a virus determining how we live. This proves as good as any time to take stock and reflect; something Nasa does with dexterous skill and a cerebral half spoken winding brilliance (close in tone and brilliance to Aesop Rock). Nasa just claimed a top spot on the hip-hop pyramid with one of the best albums in 2021.