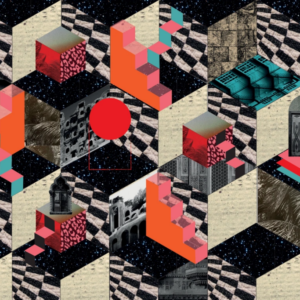 The celebrated polygenesis label On The Corner go all out to mark the release of their tenth mind-expanding record, Door To The Cosmos. Every bit as cosmological as that title suggests – borrowed from Saturn’s jazz messenger envoy Sun-Ra’s “dare to knock at the door of the cosmos” – this eclectic experimental dance compilation brings together a representative showcase of both label stalwarts and the fresh intake of burgeoning signings. All of which share the practice of fusing sounds and sonics from various global cultures to create a more exotic, denser and layered vision of dance music, fit for the 21st century.

Not that you can easily separate into tangible categories of influence or genre, but for the benefit of this run-through, and to make my task easier, I’m going to at least attempt to break these 24-tracks down into genres of a kind. In the jazz sphere we’re offered both a combination of ensemble pieces and treatments from soloists alike. The first of which straight away falls outside of those perimeters with Black Classical floating to a jazzy evoked deep-bass and spiritually voiced hybrid of trip-hop and Low End Theory A Tribe Called Quest soundings on his ‘Sisters Brew’. Luminary of the Glasgow club and blossoming, thriving jazz scene Rebecca Vasmant appears both as a soloist producer-composer with the disco glistened Afro-jazz-soul mover ‘Teen Town’, and, in the role of remixer, subtly taking a dip in the spoken-word conscious day-spa tranquility of Tenesha The Wordsmith and Tamar ‘Collocutor’ Osborn’s disarming fluty ‘Yemya’ collaboration. Composer and saxophonist Osborn furnishes this collection with a trio of tracks; appearing with a full troupe of modal style jazz musicians on the spiraling horns, amorphous swamp-jazz turn Miles Davis galactic funk implosion ‘Everywhere Live At TRC’ – which is further sent off into that heralded cosmos by Black Classical on “speed” mix duties -, and swirling around in a moody jumble of erratic breaks, prodded sax and vaporous flute on ‘Lost And Found’ – another treated version, this time with Afrikan Sciences behind the transformation.

Another jazz, be it futuristic and eclectic in inspirations, combo turns in a celestial jam for the compilation in the guise of the Nathan ‘Tugg’ Curran led flexing Edrikz Puzzle, who produce a hard-bop in freefall with ‘Jonny Buck Buck’. Snozzled sax and double bass meets with a more harassed Jaki Liebeziet splurge of drum rolls and bounces on this peregrination.

Fitting only into categories of his own imaginations, Don Korta offers up a couple of ‘samosa beat’ shorts; the first, a shuffled gumbo, the second, a Madlib style loop of hand drumming breaks. And from the valleys of Welsh-futurism, Petwo Evans transports the vales’ mists and ethereal spirits to a vague African headland of spindled and wooden bobbing beats.

In what I can discern as House, Techno and Deep Bass culture, we have the data language low bass and rattling ‘Sorry’ from the Italian “Afro-Futurist” beat-shaker Raffaele Costantino, aka Khalab; the Basic Channel and electro pop sax honked ‘Agyapong’ by AJD Twitch; and DJAX Up-Beats wobbly lunar (almost dubby in places) ‘City’s Dead (Wrapped In Plastic)’ by Copenhagen talent Uffe.

It’s safe to say that all of the label’s roster of DJ-producers, composers and jazz-heavy explorers pull club sounds in some imaginative and, sometimes, unique directions over the course of this new compilation. So expect to hear the spirit of Detroit and Chicago rubbing up against sub-bass waveforms, sophisticated itching electrified percussion, densely crafted effects, polyrhythms and real instruments on a compilation that spans both earthly and cosmological boundaries. On The Corner don’t just knock on that Sun-Ra eluded door but open it into an expanding sonic universe of jazz, Afro-Futurism, Arabian, tropical and worldly inspired dance music. It’s remarkable that this marks only the label’s tenth release; such is the breadth and quality. Better line up your copy soon, as this is going to fly out.