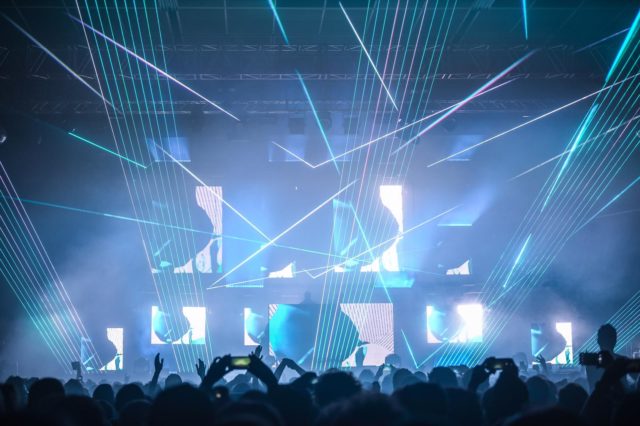 Impossible to ignore it: Club to Club eighteenth birthday present monopolised the attention of everybody indiscriminately, bringing the very first clubbers, nostalgic cult followers and simple fun and dance seekers all together in Turin. An unavoidable turnout, considering that Aphex Twin – who last came to Italy in the scorching summer 2011 for the 40th birthday of Richard David James in Salento (Apulia) – took part in the event as special guest.
Was it worth to take part? The answer is definitely yes. The show met the expectations about Aphex Twin performance perfectly: No compromises, no banal, easy-grip or dancefloor-calling revivals, but, instead, a hypnotic and arduous techno lesson, with alienating and ineffable turns one could hardly describe with plausible words. Acid intervals, dirty ambient digressions, class-rave and breakcore with subtle hints to many examples of his immense collection. In addition to all this, many highly-topical tributes to new underground artists who are giving a new sense to the genre: Lakker, M.E.S.H., Zuli, Ruby, My Dear or Skee Mask, who deserves a honorable mention for his devastating, fierce, and highly danceable set mixing up techno, jungle, UK garage, and break music. He would have been the undiscussed winner of this Turin weekend session – if only Aphex hadn’t been there.
With his experience and taste, Aphex – who appeared in the visual in the company of a mysterious female figure – enchanted the public with his habitual visually shocking show. The performance included dazzling lasers, visual effects which have now become his personal trade mark, and pictures deformed by his unmistakable sense of artwork, quoting (which was probably suggested by the festival production department) random characters of the Italian and Turin traditions: Del Piero, Andrea Agnelli, Gramsci, Rita Levi Montalcini and – last but not least – Lorenzo Senni, the contemporary prophet for the export of Italian music (just published on Warp and highly appreciated by Aphex himself).

Just like the unforgettable Autechre’s show two editions ago, the show by Aphex Twin will be forever imprinted in our minds and also in the story of Italian events – meanwhile, we are already wondering who will be the 2019 star. Never mind about the outline – and the repetition of “MT1 t29r2” and “Phloam”: Aphex Twin can perform and recombine everything the way he likes. And we will keep on wondering by what means he makes us live in a gratifying and unbelievable two-hours daydreaming. The surprise guest planned on the bill, Kode9 – a prophet himself and a loyal guest and participant in several Club to Club editions – had the honor and the burden to perform after Aphex Twin and in other circumstances he would definitely have left everyone stunned. After such an experience, one may need at least a two-days detox therapy. He starts with a track by Sophie, then he moves to footwork and finally comes back to his most canonical dubstep texture.

Though Aphex Twin was the pivot of the festival promotional campaign – see the drawing appeared on a shutter and the Gotham-city projection of his logo on Mole Antonelliana on the press conference day – it would be misleading to ignore the aspects which are making Club to Club the only Italian event able to trigger the same curiosity as other traditional and important European and non-European happenings. The public acclaim grows bigger and bigger, but the dimensions of the festival are still intimate and livable – especially with the repositioning of the second stage in the pavilion previously reserved to the main platform. The logistic organisation managed to keep the impact of the crowd under control, besides some inconvenience experienced in the peak flow moments before Aphex show in the new pavilion. 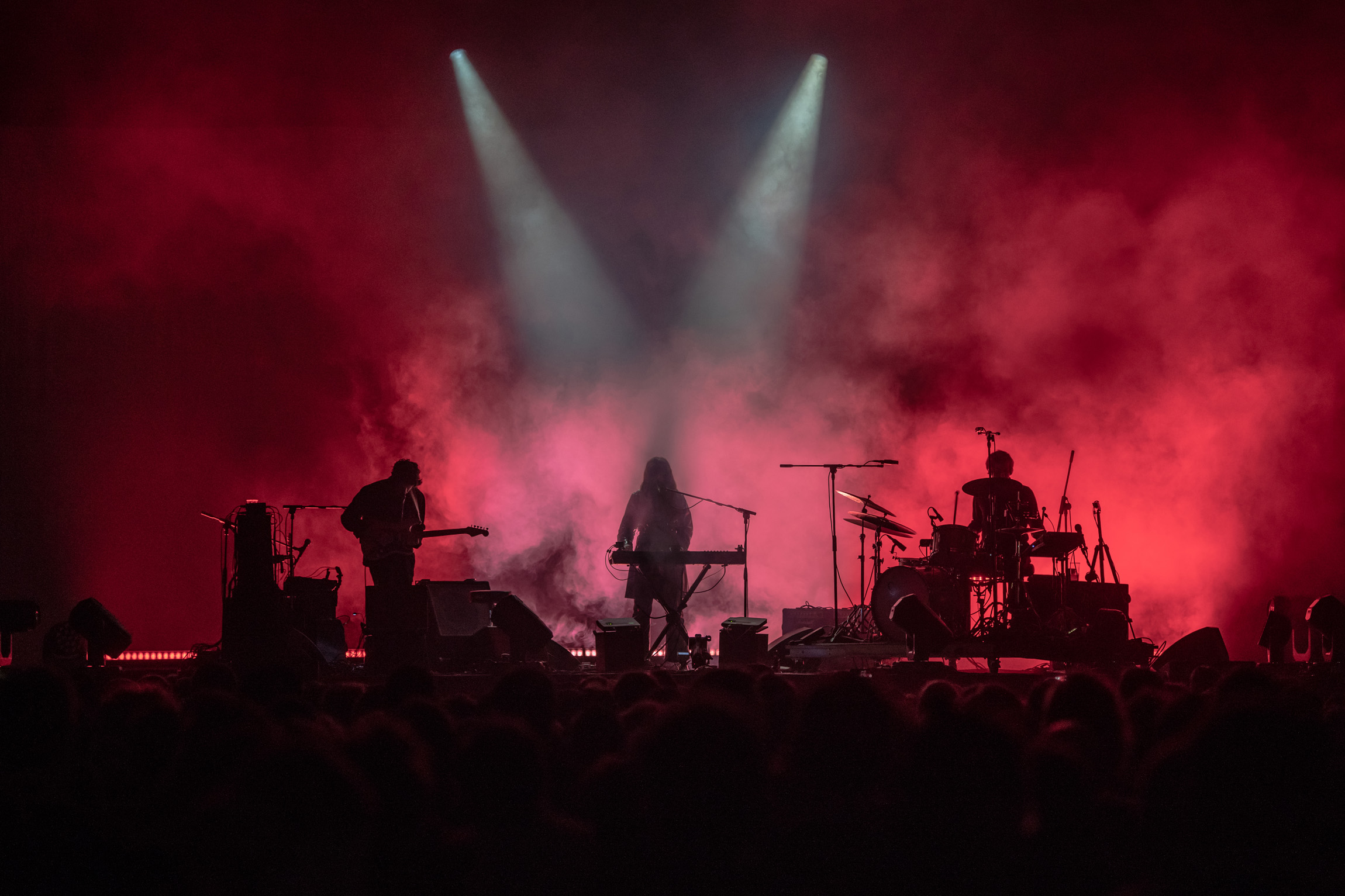 Though the artists involved in the present edition were less well known, Club to Club 2018 has resulted to be dance-friendlier and less abstract than 2017 edition. Paradoxically, this event keeps on embracing new textures which are light-years apart from the horizon of clubbing. The presence of an increasingly international audience (a lot of languages were heard spoken in the crowd) is the evidence of a decisive step forward in a historic moment where Italy seems to be musically closed and paralysed in many aspects.

An example of this tendency is the performance of Blood Orange, who – despite the dimensions of the pavilion – offered an intimate and suffused show in black-funk tradition. The band was more engaging and enhanced by the presence of two backing vocalists, who exalted Dev Hynes’s talent. This is also the case of the Beach House: despite settling in a little later, they were able to immerse in the atmosphere of the festival without annoying the public (this, thanks to pearls like “10 MileStereo”, “Walk in The Park”, “Lazuli”, and “Wishes”, which resist the passage of the decade). Obongjayar and serpentwithfeet – i.e. the two most promising bands of the 2018 edition – also contributed with their liturgical and estranging R&B. Unfortunately they performed in quite an unhappy moment, with everybody straining to take a place at Aphex show and DJ Nigga Fox slapping the crowd to the rhythm of kuduro and appealing remixes. Last but not least, the chameleonic Yves Tumor, who reinvented his style in emo/glam key for the gruff show promoting his new album.

The incitement to conventional dancing was given by female DJs. Josey Rebelle deserves the mention of honor for her expertise and the same goes for Avalon Emerson, who offered a mature performance at the end of the first long day at Lingotto. Fairly underground artists (well-known by well-informed clubbers) also played their part: We are referring to Vessel, with his fierce style, Equinoxx, a Jamaican project nurtured by the presence of a vocalist, and Call Super, whose popularity keeps on growing and who is considered the real revelation of the festival. As for Tirzah, the opinion of many OGR early visitors is the same. Her sophisticated, unstructured nu-soul was simply fascinating.

As it always happens in actual international festivals, it is impossible to be ubiquitous and attend every performance. The real greatness of a festival can be measured also by such difficult overlays – not tragic as the hectic 2017 edition, but still demanding.
The theme of this year was a light in the darkness. And this festival really ignited a spark of hope in the Italian darkness, where there are lots of little stars shining. Thanks to unmissable events like Club to Club and to the idealistic Italian New Wave format – represented by artists like Primitive Art, Bienoise, and Gang of Ducks in this edition – there may be a chance to revive attention and passion for quality clubbing in every Italian context.