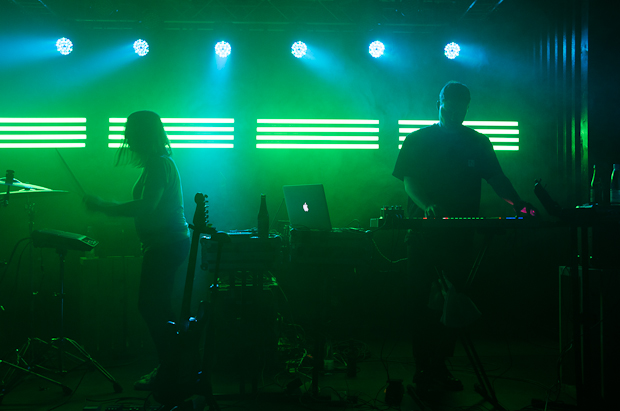 There were four Swedes in Denmark… no, it’s not the beginning of a joke but of a concert instead.
So, there were four Swedes called The Radio Dept. and they play guitars and computers (and a bass guitar and also some percussion), they play so-called dream pop, and they do it right.
Relaxed atmospheres, ethereal synths and slightly robotic voice, when you listen to them they recall somehow Air or Royksöpp, but with that hint of Scandinavian cold warmth that makes you think a little bit of Kings of Convenience.

Half of the setlist is songs from the latest album released last year, “Running out of love”, songs with rhythm, solid, that get you and you can’t avoid moving along. The other half of the setlist is an anthology of their discography, but the result is a homogeneous concert that somehow plays with time, expanding it without boring.

The fourteen songs once played take something more than a hour, but ears are satisfied and on the faces of the crowd there is the happy smile of those who enriched their day with something pleasant.

Setlist:
Sloboda Narodu
Committed to the Cause
We Got Game
David
Never Follow Suit
The New Improved Hypocrisy
Bus
Running Out of Love
The Worst Taste in Music
Heaven’s on Fire
Death to Fascism
Swedish Guns
Teach Me to Forget
Occupied