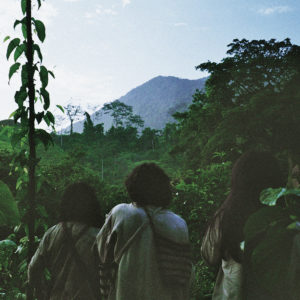 Song as necessity in a culture without the written word, the Kagabas people of the remote isolated reaches of Colombia’s Sierra Nevada use singing to record their history; to offer auguries; and to give thanks, tribune, to nature and the “great mother” Aluna who sustains their existence.

Relatively cut-off from the outside world (for good reasons) and so attracting a mysterious aura and curiosity, these descendants of far more atavistic and highly advanced forbearers, the Tairona, originally escaped the lowlands from the encroachment of invaders for the higher, more guarded grounds of Santa Maria. With veneration for their environment, the Kagabas see themselves as “guardians of Earth”; a belief that extends to warning the rest of the planet about its heinous disregard and treatment of Earth. As “elder brother” to the “young brother” of modern society, they proffer a more harmonious relationship to nature in the face of the legalized and illegal logging and deforestation that threatens their home.

So grave and important is the Kagabas sagacious message they invited the BBC to broadcast this environmental wisdom. The From The Heart Of The World documentary struck a chord at the time, and charities such as Nativa, set up by Franz Florez, have at least amplified that message whilst delivering practical solutions: such as replanting trees and buying back land in the region to medicate the destruction. It was through a podcast on Radio France International (RFI) highlighting the effects of climate change on the Kagabas that this project’s instigator, the producer and DJ Lion’s Drums (alias of one Harold Boué), first heard of the remote people and their plight. Sparking an interest, curiosity, Boué made contact with the Nativa charity, proposing what would eventually be this album of subtle and composed electronic augmented treatments of Kagabas song, voices, narration and spontaneity.

The Marseilles-based artist was welcomed into the community; spending a week exploring the mountainous jungle terrain with one of the village’s spiritual guides, known as the Mama (which means “sun”), and his fifteen-year-old son. With digital recording device at hand, Boué was ready to capture unguarded and animated breakouts of song, storytelling; most of which is sung directly to the nourishing forces of the wilds and land.

Markers, happenstance and the interactions of this experience have been passed through a congruous production of filters, synthesized instruments and atmospherics; largely kept minimal, entrancing and vaporous so as not to ruin that source vocal material. Later on, those previous downplayed, accentuated and often-wispy electronics become more prominent; the album’s homage to just one of the Kagabas’ animal neighbours (and food supply) the ‘Deer’, lets a dance groove of late 80s Carl Craig kinetics and acid-techno squelches, burbles and beats bounce around a pattered intonation of tribal voices. Elsewhere it’s only the suggestion and trace of those electronics that you hear. For example, a certain hallowed dreaminess builds around the album’s opening airy ‘Alouatta (Hembra)’, as chest-like patted bass thumps trills of wildlife and rattled percussion breathe attentively around a melodious calling. It’s a New Age kind of minimalist techno that undulates the materialized voices and tributary source of ‘Water’, whilst ‘Music From Memories’ counterpoints subtle cosmic organ phrases and rays with reverberated and faded recordings of various talking, narration.

An exotic divination, the Kagabas album seamlessly connects modernity with a universal paean and the ache from traditions of an age-old community. Neither an exercise in library ethnography nor an electronic album, Boué and his hosts create an often-otherworldly sonic and rhythmic navigation through a dense, lush environment at the world’s edge. The message however is a precarious one in which climatic change and the creeping invasion of industrialism infringes upon the survival of these indigenous communities. Hopefully projects like this can highlight the cause and stop the rot, whilst lighting the way for more inventive and progressive creative ventures, soundtracks. All proceeds from the album will go to the Nativa charity.