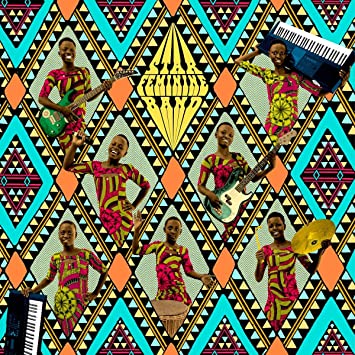 Disarming a serious message of female liberation and opportunity with the most joyous, passionate and brightly fluttering of song, the Star Feminine Band sound like (Le) Musical Youth meets Wells Fargo and the Dur Dur Band on their debut album for the Paris label Born Bad. With a remarkable backstory, coming together in the most unusual of circumstances and uniquely pushing the rights of sisterhood in their Benin homeland, this cast of young kids and teenagers (though those ages hide the fact they’ve had to grow up fast in a society that undervalues female empowerment and freedom) send out the positive vibes through an embrace of Ghanaian Highlife, Congolese Rumba, Soweto lilting choral soul, Nigerian Afrobeat, the local Vodun and even Calypso.

It’s no surprise that Benin has such a glorious mix of styles within and bleeding over its border, caged-in as it is by Togo, Nigeria, Burkina Faso and Niger. It is a shinning intersection of African music and a progenitor of styles itself, home to such legends as Gnonnas Pedro and Antione Dougbe. Those male titans can now make room for this sisterhood of infectious, candid girls from the remote Northern town of Natitingou.

At this point we need a little background for context. Answering the call of this project’s instigator Andrè Balagueman through a local radio station for girls interested in taking part in a series of free music training sessions, five of the eventual lineup arrived from that remote Northern Benin village in response. They were joined by two of Balagueman’s own daughters to make this a seven-piece. With no previous musical experiences other than natural talent, they were all taught the drums, guitar, bass and keyboards. Sessions were intense, fitted in-between the priority of school. No one though could quite predict how this project would keep building momentum. But then not everyone has the driver that propels this group. Music for them is nothing short of emancipation, the opportunity to break away from a male-dominated culture.

Prospects are slim for women in many of these outposts, where forced marriages and teen pregnancies are common. Employment means selling bar peanut, bananas and the local “millet drink”. Thankfully the noise that started to grow around this breakout band garnered much attention nationally. The mayor of Natitingou even designated them a practice space.

Furthering an obvious appeal and rich polyrhythmic energy, French engineer Jérémie Verdier carried news of this unique Benin wonder to Europe: stumbling upon the band whilst volunteering in the country a couple of years ago. On his return home he enthused about them to the Spanish engineers and videographers Juan Toran and Juan Serra, who were fascinated enough to seek out and record them: both musically and for a short documentary.

What they captured is a sweetened, spritely youthful energy; a burgeoning, blooming even, upbeat Afro-pop, soul, funk and choral record of girl-power. Far from some kind of manufactured band, or gimmick, the Star Feminine Band really do have something to shout about; whether that’s a demand for equality on tracks such as the swaddled Township ‘Femme Africaine’, or in encouraging women to succeed, as they do on the shared vocal stubbed drums loose ‘Rew Be Me’. That second track is sung in the “Peul” ethnic group dialect (one of the largest nomadic groups in the Sahel and West African regions), and is just one of various languages and tribal heritages that you’ll hear on a championed shared experience of ethnic diversity. The Highlife trilled, drum splashed dance ‘Iseo’ is a call to arms in that respect, exhorting a need for the many strands of Benin culture to unite for the common good.

But amongst the lilting and tighter invigorating performances this is about providing a real space for women to break with convention, and to wrestle free of constrictive traditions. As its instigator Balagueman puts it: “I simply wanted to show the importance of women in the societies of North Benin by forming a female orchestra.” With ages as young as ten, and the oldest only seventeen, there’s a long bright future ahead for this group, who create nothing short of infectious sunshine joy.