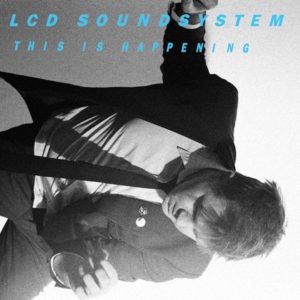 James Murphy is snapped by the camera suspended in a mock semi-Elvis hip-swinging pose, on the front and back cover of his latest empirical dance album for thinkers, This Is Happening. This gesture pose goes even further in referencing Murphy’s omnivorous methods, with the similarities to Bowie’s Lodger album hardly going unnoticed. There’s even a hint of that vague incredulous but vulnerable Bryan Ferry expression to it; whilst inside the cover we find a monochrome photograph of the LA studio, where this album was produced, that seems eerily reminiscent of Can’s legendary Inner Space studio décor and set-up. Already without even having to listen to a single note, we are handed a myriad of symbols, signs, pointing out that our achingly cool Murphy is not just a collector of both seminal key music but the imagery that goes with it.

His whole life has been catalogued and crammed into the LCD Soundsystem albums. Like Bowie’s own seminal triumvirate of 70’s Berlin period works, he too creates an impressive aura and almost mystical methodology around his collection of records. In a way he substitutes the cold war, heroin addled seriousness of that damp unwelcoming skyline with that of New York: This album may have switched recording to the west coast, but it essentially remains intrinsically linked to the ‘big apple’, in mood, atmosphere, themes and lyrical content.

I’ve already drawn upon Bowie as an obvious influence upon Murphy’s sound and art, but there are also various other rich allusions made to Talking Heads, Eno, David Sylvian & Ryuichi Sakamoto, The Idiot era Iggy and even The Cars. Though he seems to be both enacting to some degree and at the same time reveling in them, these references never prove distracting, rather endearing in fact.

Murphy, as always, is joined by an eager list of collaborators. All of which are drawn from a whose-who list of in-vogue electronic acts. Not just backing musicians, this ensemble also co-wrote some of the tracks. Nancy Whang (Juan Maclean), Pat Mahoney (Les Savy Fav/ Hot Chip) and Tyler Pope (!!!) – whose former colleague and sometime LCD Soundsystem live drummer Jerry Fuchs died in a tragic accident involving a lift a year before the release of this album, his name appears in the dedications – all punctuate key moments in the songs and add some vigor to proceedings.

Apparatus wise, Murphy digs out an impressive array of old synths and instruments, including rarely seen kit and countless emulators that are all steeped in yet more historical importance and very much of the mode. As evidenced on the actual record, he certainly uses them, though this can sometimes chain the sound to a specific retro epoch, resulting in a touch of over familiarity and cultural editorial chic.

This Is Happening seems more confessional then the last album, as Murphy laments tales of the onset of middle age, falling in and out of love, acting the fool until its almost too late, and willing to compromise to please a certain somebody that you wish to share your life with. Each self effacing observation and clever wry vignette of rhetoric seems to suggest that our protagonist is reaching a reflective period in their life, taking stock and weighing up their worth in the world. Analogies are made to feeling worn, weary and fed-up; perhaps the burden of being among the planets most uber edgy icons was becoming too much – at 40 years of age it seems surprising that he still had such a hip stature.

Whatever the truth, those shackles would soon be removed (for a time), as his he announced that this would be the last ever LCD album. This would at least offer some respite, until the inevitable comebacks. Interviews at the time suggested that his decision to call it quits was borne out of a number of reasons, including the natural running of its course and to some extent the unpredictability of the music industry – commenting that the bands label EMI may not even exist in a few years.

Let us push on with the album itself. It’s the suggestive tones of David Byrne and John Cale that can be heard on the album’s opening salvo, ‘Dance Yrself Clean’. Murphy constructs a linear moody low riding synth classic here. Those contagious pan rattling percussive rhythms kick in and we’re off on a roll; a second monumental shift pours on some heavier bass lines and extra banging drums as Murphy switches from resigned They Might Be Giants wordplay to gradual resigned holler.

This pulsing stellar hypnotic bet tells a tale of dancing away and absolving yourself of all those unflattering home truths and reality check problems – you really are losing your edge this time. I love the rather importune drum roll that comes unstuck near the end, which constantly throws me every time.

The leading single ‘Drunk Girls’ is what you might call the shout-y one. A rework of ‘Boys Keep Swinging’ for the meow meow generation, effortlessly breezes through with certain aloofness. It’s also the strongest connection you’ll find to the Sound Of Silver album.

‘One Touch’ works further wonders with the best of Lodger, aping its almost disjointed tricky framework and banks of bubbling arpeggiators, to produce another driven thumper of a track. The bass stalks the track as Whang yells out like an over excited teenager with Murphy, who’s honed a more baritone low vocal impression of Bowie.

Personal favourites ‘All I Want’ and ‘I Can Change’ both use emotive swooning vocals and language to convey regret. The first, relates to a shaky relationship, where Murphy pleads for forgiveness, he knows that he’s been a jerk and now begs for pity. Robert Fripp evoking ‘Heroes’ arching sustained guitar riffs gently underline the fraught tempo, on this profound moving track. The latter of these couplets mockingly retorts clichés and takes a swipe at the parodies of love itself, whilst carousing over a clattering 80’s curio of a tune. Full of horizon grabbing searing melodic synths and chime filled percussion, this sudden mantra for change is surprisingly moving.

‘You Wanted A Hit’ travels due east, mixing the oriental obsessed textures of David Slyvian and Ryuichi Sakamoto’s soundtrack work, and the more brightly synth pop of The Yellow Magic Orchestra, before making for a more radio friendly new wave rocking Cars.

‘Somebody’s Calling Me’ sounds like a Weimar obsessed Goldfrapp performing Grace Jones prowling ‘Nightclubbing’ in a honky-tonk piano bar. The creepy leading beat and rhythm slowly crawl along for the full seven minutes; the odd squelch halcyon synth changes the tone, bringing in an almost glowing climbing vine into the sunlight before dropping back into its brooding motif. It’s like the dream is finally over, and this is our last dance, as Murphy in a sinister fashion coaxes the ladies back to his place to see how he’s really living, which by the sound of things is far from clamorous and in fact seems bleak: ah the life of a troubadour.

This Is Happening manages to mix all the more sublime and emotive moments from the previous two albums in a kind of reappraisal like manner, emphasizing the LCD brand to an extent and encouraging the audience to analyse a life. It’s inspiring that this is essentially a dance album, as the songwriting remains quite introverted and lays bare certain amounts of self loathing, tackling themes which never usually get aired on the carefree dancefloor.

Near enough every track poises infectious grooves, regardless of the multi-layered intricate playing and concentrated efforts of musicianship. Murphy may sit there stony faced denying his talent, but it won’t wash with me. This record had been countlessly worked and re-worked in the years before its release, betraying any sense of fluke or misshapen bumbling or accident. Great albums don’t just happen out of coincidence.

The grown up album of that original unholy trio of LCD Soundsystem records, This Is Happening was the perfect bookend and swansong; quitting whilst at the peak. Well that was the plan. After a considerable hiatus, Murphy reformed the group for reunion tours and a sporadic number of releases, before dropping the critically well-received American Dream opus in 2017. Still, This Is Happening is a great testament to a period when Murphy knew how to bend his influences to his own end and will, a creative run both enviable and highly influential that still stands that important test-of-time.