Welcome to another edition of the Monolith Cocktail writer’s revue; a shorthand roundup of recent favourites and choice albums from the last month or so. 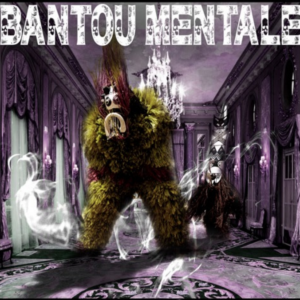 A sizzle. A static shock, a charge that most importantly signals something is changing in the musical fabric; a signal of something dynamic but also something dangerous, a mirror image of the real world, the real refugee and migrant experience and chaos. Vivid and fresh being the optimum words as the Bantou Mentale vehicle shakes up the melting pot convergence of Paris’ infamous Chateau Rouge; addressing assumptions/presumptions about their native Democratic Republic of Congo home in the process. Not so much explosive, the electric quartet seem relaxed, even drifting as they channel the soul and spirit of co-operation; opening up aspects of the DRC culture and humility often lost or obscured in the noise of negativity – and the Congo has had more than its fair share of violence and tumult both pre and post Colonialism.

Drawn from a rich selection of Kinshasa (and beyond) sonic propulsive outfits and artists, including Staff Benda Bilili, Konono No.1, Koffi Olomide, Jupiter & Okwess and Mbongwana Star, concept guy (for this is a project, a statement, that moves beyond music to encompass performance and visuals), drummer and singer/songwriter Cubain Kabeya, guitarist Chicco Katembo and singer Apocalypse have all been around the block, fronting or backing every fresh new development on the Paris scene. Closing the circle, the Irish born and Parisian raised all-rounder and producer Liam Farrell (professionally known as Doctor L) brings an equally impressive resume to the dynamic venture; working with such luminaries as Tony Allen and Babani Koné. Cubain and Katembo both previously worked with Damon Albarn back in 2010 as part of the Kinshasa One Two album, whilst Farrell has collaborated with Cubain on a number of electro-fried African dance projects: Black Cowboys and Negro-P.

Here and now they combine forces with scenester Apocalypse to push the envelope further still, merging the industrial with 2-step, d-n-b, electro, hip-hop, soukous, ndombolo, grime, funk and rock. Everything except the DRC’s rumba; far too smooth for the raw energy and prescient turmoil that the Mentale are articulating. Kinshasa reloaded; Bantou Mentale is a thoroughly modern sonic vision of peaceful cross-border fraternization. Lingering traces of Jon Hassell & Eno, Radio Tarifa, UNCLE, TV On The Radio and even label mates Dirtmusic are absorbed into an electrified subterranean of frizzles, pylon-scratches and hustle-bustle. Above all, despite the subject matter, despite the polygenesis sonic hubbub this is a soulful soundtrack: cooperation ahead of fractious division and hostility. A more positive collaboration for a 21st century chaos. 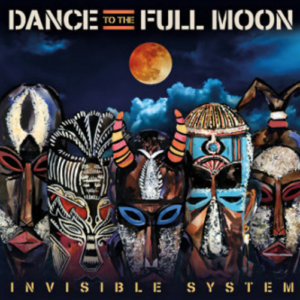 An apt hand in transforming the traditional sounds of Mali, the British producer Dan Harper’s experiment in this field stretches back two decades; set in motion by the rudimental laptop-produced Acid Mali project he created whilst working as a Capacity Builder for a local Malian environmental NGO. So taken was Harper with the country, he ended up not only meeting his future wife there but setting up home and a studio in the capital, Bamako. His wife, Hawa, would introduce Dan to childhood friend and renowned guitarist Banjougou, who in turn would bring in tow the dusty soulful rich vocalist Sambou koyaté to sing for him. Both artists appear on this new album alongside the griot siren Astou Niamé Diabaté, who as it turns out sang at Dan and Hawa’s wedding.

Taken from the same recording sessions as Dan’s previous album, Bamako Sessions, his latest transportive exploration under the nom de plume of Invisible System, once more lends an electrified and synthesized pulse to the spiritual soul of Malian music. Originally put together in a more languorous fashion with a variety of musicians coming and going, jamming in a mattress proofed room in a rented house in the capital, Dance To The Full Moon took shape at the end of a tumultuous and violent period in Mali’s history. Experiencing firsthand (literally on Dan’s own doorstep) the terrorist attacks that followed in the wake of a, finally curtailed, Islamist insurrection and the ongoing war between Mali’s government in the West and the Tuaregs of the North and Eastern desert borders, fighting to set-up an autonomous region, known as the Azawad. Though a certain stability has returned in part to Mali, attacks still occur sporadically; the effects of which permeate throughout the work of the country’s artists, the majority offering a conciliatory tone with the emphasis on unity and understanding. With that in mind, Dan’s album is rich with passionate expressive longing and intensity; the varied juxtapositions of the griot tradition and less rural, more urban vocals combine to deliver some startling performances.

The gently resonate accents and fanned waft of the Malian guitarist’s Kalifa Koné and Sidi Touré accentuate the brilliant vocal parts; a gathering of powerful griot acolytes, singers and even a rapper (Mali rap star Penzy) that includes the already mentioned trio of Banjougou, Koyaté and Diabaté spiral between the sweetened and intense, the hymnal and physical. Dan boosts and filters those strong performances with a production of techno, modern R&B, dub and futuristic post-punk that sonically weaves in echoes of Massive Attack, Daniel Lanois, King Ayisoba and Dennis Bovell.

Nothing can ever truly improve upon the roots and soul of the traditional courtly music of Mali, its desert blues and Bamako rock of course, but you can push it into exciting directions. Dan’s rewired buzz and pulse does just that, giving a kick and lending an attuned production to the Mali soundscape. 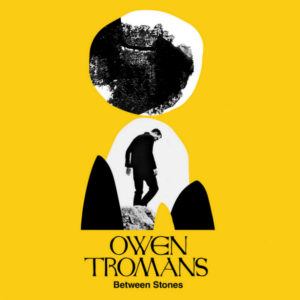 In the spirit of maverick adventure, Hampshire-based singer-songwriter Owen Tromans walks a similar path to the arch druid of counterculture and psychogeography traversing, Julian Cope. The co-founder of the most informative sonic accompanied rambling fanzine guide, Weird Walks, Tromans (and his co-authors) circumnavigates the hidden British landscape of run-down flat roof pubs whilst waxing lyrical about the fantasy role-play meets Black Metal flowering of the Dungeon synth scene, and the more well-known traipsed chalk pits and megalith landmarks.

The soundtrack is important, both as an enriching experience and communicative tool. And on Between Stones the soundtrack could be said to be a surprising one. Ambling certainly; wandering this sceptered Isle imbued typography with all the ancient lore it entails, yet far from held-down to the British sound, Tromans actually channels a English pen pal version of R.E.M. and the great expansive outdoor epic trudge of Simon Bonney on the album’s hard-won stirring opus ‘Grimcross’: Imagine an 80s American college radio John Barleycorn. There’s even a touch of a mellower Pixies and early Dinosaur Jnr. on the grunge-y ‘Vague Summer’, and hints of Mick Harvey throughout the rest of the album.

Beautifully conveyed throughout with subtle Baroque-psych chamber strings and a country falsetto, Tromans follows the desire lines, hill forts and undulating well-travail(ed) pathways on a most ruminating magical songbook; a thoughtful and poetic accompaniment that goes hand-in-hand with those “weird” and wonderful walks. 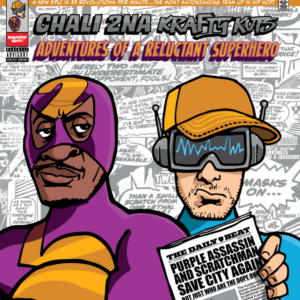 Expect party-hardy funk and frolics from Chali 2na and Krafty Kuts at your peril. When ‘Adventures of a Reluctant Superhero’ seems geared towards cartwheeling breaks and lyrical calisthenics, reinforced by ‘Guard the Fort’ and the sleeve/title, the dominant powers are a variety of tempos – KK releasing simple, neck-aware energies – and flows in thought (covert life coach ‘Feel the Power’) that make incisions: i.e., 2na doing what 2na does. Victory assured.

Elevating his status to ‘GITU (Greatest in the Universe)’, Chris Rivers doesn’t lose sight of the road ahead, and where the title and look-at-me connotations run deeper. The Big Pun bloodline has never run truer; capable of reading the room so lighter crossover moments share space with ripsnorters to rattle the place. Overall, a polished player with reach. 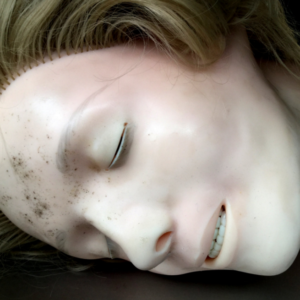 The new release from the fine Bearsuit Records finds us tumbling down to the spiraling sounds of Haq; 60s spy theme sexiness merges with the avant-garde dreampop of a bewitched Stereolab playing hopscotch with Delia Derbyshire whilst sucking on the feedback of a JAMC lollipop.

The obvious love and understanding of pop music in its many genres and changes throughout the decades are lovingly brought together to make a wash of beautiful tunes. Angel like vocals float over gentle beats, soulful guitars and well constructed rhythms, delicately plucking at the heartstrings. This album really is a beautiful work of aural magic that can and will take you AWAY from the drudgery of everyday life and makes for quite a moving experience: maybe there is a god after all. 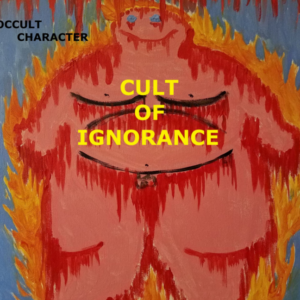 In this day and age you need people like Occult Character to tell the world how it is and what just is happening, and this mini LP is, as I have said before about OC, a modern day Woody Guthrie writing modern day electro folk songs describing life in the Trump led America: and this album proves it.

This could be one of the most important albums released this year. It is the sound of the underground raising two fingers to the “Me” generation. If OC were as well known as John Lennon the US government would be trying the damnedest to get him deported. This is the sound of a artist at the end of his tether writing short requiems to the death of the country he loves ‘Police State /Shit Sandwich’ could be the angriest songs you will hear all year. He pulls no punches; dark humour hides the sadness in these short songs the harshness of the beats only goes on to soundtrack the knife-edge world in which we live today. This is a must be heard album by the most important artist in the US underground today.