Welcome to a second edition of the Monolith Cocktail writers revue; a shorthand roundup of some of the team’s favourite choice albums from the last month or so. 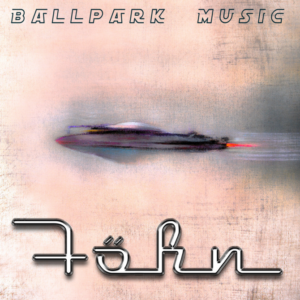 Ever expanding the remit of his Kentish Estuary satellite label, Gare du Nord, Ian Button’s latest project provides a melodious if experimental base for the avant-garde sonic work and poetry of Italian artist Napo Camassa III. A stalwart of the late 1960s and 1970s Italian underground scene, a smattering of tapes from that period were due a mini-revival through Button’s highly prolific label. As fate would dictate, those tape recordings proved far too brittle to transfer, falling apart in the process. Taking this as an opportunity to instead create something new but in keeping with the spirit of Camassa’s experimental soliloquy and ad-libbed one line poetics, and quivered ghostly channeling seedy rock ’n’ roll vocals, the outsider music framed Ballpark Musicmerges the lingering, almost supernatural, presence of its influences with deconstructive homages and vague elements of jazz, surf and art-rock to produce something recognizable yet chaotic and skewered.

Balancing on the edge of this chaos the Button/Camassa dynamic, widened to bring in label mate and stalwart of the psychedelic/art-rock and Liverpool scenes Joss Cope (sibling to arch druid Julian, and just as active an instigator of countless bands in his own right over the decades), uses the well-chosen descriptive weather name of Föhn to articulate the relationship between the random, improvised and more structured, Föhn being a warm summer wind that blows in from the Alpine uplands; strong enough at times to blow tiles off a roof, at others, an enervated breeze, barely felt. Musically representing this windy phenomenon, the trio at their most blowy and heavy reaches for an abstraction of post-punk, no-wave, garage, shambling blues and Krautrock; at their most subtle and drift the surf noir dreaminess and mystery of The Beach Boys and evangelical spiritualism, gospel ye-ye and rock ‘n’ roll of Charlie Megira, Alan Vega and The Legendary Stardust Cowboy.

Though the central tenant of nearly everything that Ian Button does musically is nostalgia (Button and his unofficial label house band, Papernut Cambridge, have also released more or less at the same time another volume of Nutflakes inspired cover versions), Föhn is one of the more interesting and progressive projects he’s been involved with of late; heeding the past certainly, but pushing the original concept for this enterprise to produce something anew, the wilder poetic assemblages of Camassa tethered, in part, to an amorphous melodious soundtrack. 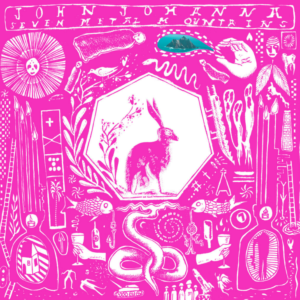 With afflatus fervor Norfolk-based artist John Johanna transduces the mountain allegories and metaphors as laid down by Noah’s grandfather in the vision-dream-revelatory Book Of Enoch into a gospel-raga-blues and Radio Clash prescient Biblical cosmology. Interrupted from Enoch’s visits to the heavenly realms – where, as Johanna’s Strummer fronts Wah! Heat, Gothic redemption goer ‘Standing At The Gates Of Love’ takes its title from, you will find a no-nonsense angel guarding the Pearly Gates with a flaming sword in hand – the Seven Metal Mountains metallurgy passage is as much an augur as observed proclamation. Used here as a frame for Johanna’s second visionary album of spiritual nutrition in a Godless age for the always brilliant Faith & Industry label, the dour liturgy of Judaic tradition and law inspires a message of forewarning and yearns for less materialistic avarice: The actual verset golden anointed title-track that closes this album fashions a pastoral English church vision of the more angelic communal Popol Vuh, and has a certain ray of optimism musically as Johanna croons “when love sets us free.”

The gospels according to John Johanna (and friends of course, with the prolific and in-demandCapitol K once more on production, and The Comet Is Coming drummer Betamax and Seafoxes’ Karina Zakri both making guest appearances) offer love and caution, not fire-and-brimstone: As the PR spill mentioned, a congruous bedfellow would be PJ Harvey’s Let England Shake. Johanna’s Seven Metal Mountains translates Biblical prophecy marvelously into a vivid eclectic songbook of protestation post-punk, indie, folk, psych and lilting Krautrock. 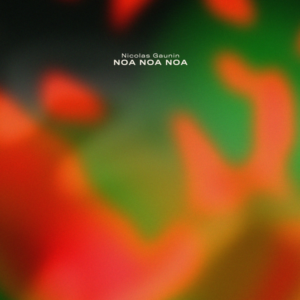 Vinyl (and the odd cassette tape) specialists with a considered taste for something different, the Hive Mind’s burgeoning roster of international discoveries once more gives a platform to the unusual and difficult to define. The Brighton-based imprint is now inviting us to immerse ourselves in the strange exotic minimalism of Italian electronic artist Nicola Sanguin, who’s original ambiguous mash-up of world music influences and surreal sound experiments Noa Noa was released by Artetetra Records in 2018. Now with an additional extra “noa” to the title this odd curiosity of atavistic African percussive rhythms and stripped radiophonics is getting another pass with its first ever vinyl release.

Using the barely interchangeable anagrammed Nicolas Gaunin name for his solo projects, Sanguin builds a both recognizable but exotically amorphous soundscape that at times recalls the Krautrock legends Embryo’s more percussive experiments in Africa, the dreamy mysterious invocations of Le Mystere Jazz de Tumbautau, Radio Tarifa, Ethno-jazz at its most untethered and Analogue Bubblebath era Richard James. And yet still, it doesn’t really sound like any of these, or, anything else for that matter.
Definitely in the sunnier light-hearted, more diaphanous and optimistic camp of electronic music – a scene that all things considered is duly reflecting the anxiety and uncertainty of the times, moving towards the dystopian – there’s still less than a bubbly, even euphoric radiance to these tropical heat intensive recordings: Many of which, we’re told, were recorded in one take. Abstract to say the least, vague sounds of thumb-piano, Serengeti and jungle wildlife, bamboo glockenspiel, clacking wooden and bass-heavy hand drums ride over, merge with or undulate under a minimalistic Techno workshop accompaniment. Noa Noa Noa is indeed a thing of curious evocation; a searing balmy transduced soundtrack worth investigating. 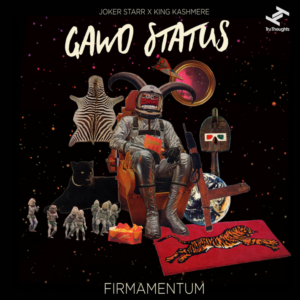 Gawd Status is not a crown that lies heavy with Joker Starr and King Kashmere, Firmamentum a rolling thunder of articulate rage and a fiercely tribal shakedown rewriting the Blaxploitation manifesto. The Iguana Man, an absolute banshee on the boards, appears in a more advisory, all-seeing role on the mic, while Joker Starr is at the front, warring so that no man is safe, allowing for occasional leave of reality. Militant pride that’ll uproot those sitting on the fence, including a silky smooth soul intermission playing its position, at a scandalously slim eight tracks long it’s a saga that must run and run. Absolutely boomin’. 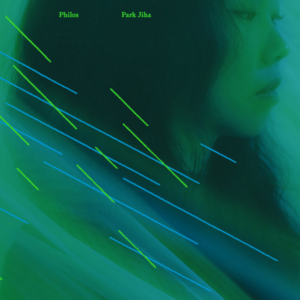 Following her universally applauded debut album, Communion, Park Jiha has chosen Philos – from Greek, plural: loving, fond of, tending to – as the title for her latest release on Glitterbeat‘s sub-label, tak:til.

It has been described as an “evocation of her love for time, space and sound”. This is certainly evidenced in the multi-instrumental and baleful opener, ‘Arrival’, which consists of simple, metronomic strums and reedy high notes that lace around each other in ominous prismaticism. The piri, a double-reed bamboo flute played by Park, features heavily in this piece, as it does later during the album’s title track.

The album departs from the instrumental during the track, ‘Easy’, which features the breezy and philosophical (or, rather, extrajudicial) spoken word of the Lebanese poet, Dima El Sayed. The upper notes intensify and push the vocals to a dizzying and distorting conclusion. ‘Pause’ follows and offers the listener a momentary armistice after the rallying call of ‘El Sayed’; the familiar but distant sounds of static and microphonic noise are point’s d’appui in an otherwise transcendental world of intangible sounds. This hypnotism is also evident on the final track, ‘On Water’, as the piri melody and xylophonic bells glint gently in the eventide.

There is an eloquent passage in the album notes which describes Philos as “[looking] to the future whilst continuing to converse with a rich instrumental language from the past”. This admixture of traditional Korean and Western instrumentation, coupled with compositions that lean towards the ambient and neoclassical, transmute Park’s experiences of a world awash with changing tides, transitory weather and ever-expanding cities into something that is indefinably atemporal. 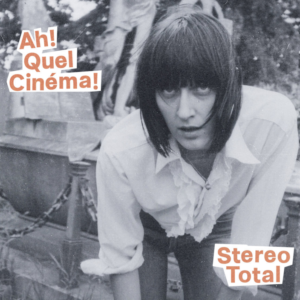 This LP is bloody genius! Any LP that kicks off with a track that sounds like The Prodigy but played on a Bontempi organ is not going to go very wrong, and then, carries on with the pure blissfulness of French lo-fi garage pop.
‘Ich Bin Cool’ lives up to its name: if only all pop could be as glorious as this I would actually walk about with a smile instead of my constant unbecoming frown.
There are melodies that could melt the heart of the sternest of motherfuckers: Tin pot drum machine twangy guitars wonderful sexy French female vocals dripping with drop dead Sandie Shaw like shoeless beauty, and when the ballad ‘Methadrine’ kicks in, has there been a better song recorded this year? A beautiful offbeat ballad of sadness and humour and drugs: “nine days a week we were so high”.
This LP is so good it has pissed me off a little. I thought I had made the album of the year with the Bordello and Clark Atlantic Crossing LP, but this has knocked it into a cocked hat. But don’t mind, especially when there are bands capable of making records of such beauty; when bands can come on like Stereolab one minute and a French Velvet Underground the next – ‘Brezil Says’ is a track worthy of the Velvets at their finest: pure pop heaven.
I think the playing of Ah! Quel Cinema may become a daily event this year; an LP to lose yourself in the pure beauty of perfect lo fi pop. 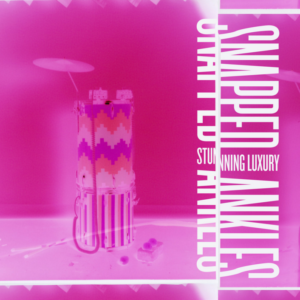